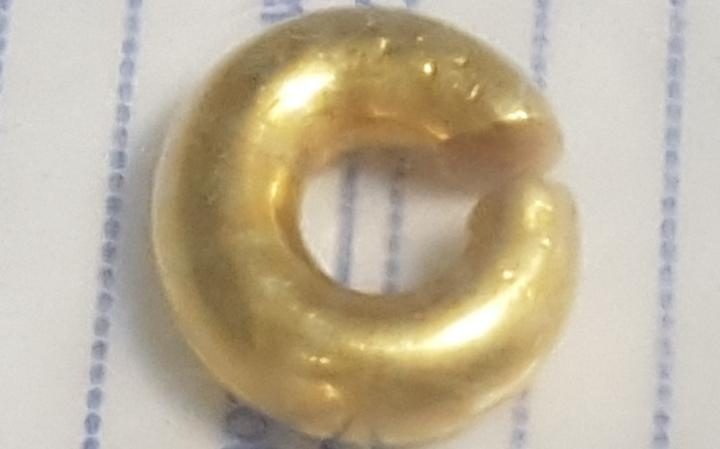 A nighthawker who found a rare gold Bronze Age ring when he was illegally metal detecting on private land has been found guilty of theft.

Ricky Smith, 34, discovered the Penannular ring, a gold ring with a small section missing, on a Surrey bridle path two years ago.

But the detectorist of 11 years who was “in it for the money” failed to report his find of “treasure” to the coroner within two weeks as required by law.

His theft robbed Britain of an important part of its history by depriving archaeologists of a chance to explore the area and gain more knowledge about our ancestors.

Nationally, around six Penannular rings dating from the Late Bronze age period of between 1150 to 750 BC are found each year.

But this is only the fourth gold Bronze Age item found in Surrey, meaning that it is of particular importance to the county.

His crime first came to light after he contacted Surrey County Council’s Finds Liaison department in September 2014, stating that he had found a ring similar to one found in a recent hoard in Gloucester.

He said he had found the ring weighing 9.46 grammes on a bridleway within a private estate in Cranleigh and was told he had to report his find to the county’s coroner.

He rang back three days saying he would report it to Sussex but didn’t.

He was then tracked down and the ring seized from his house in Cranleigh.

It was later confirmed that Smith had contacted a museum in Sussex but had not reported his find to the coroner, breaching the 14 day gap granted by the Treasure Act legislation.

He also failed to answer a summons and a warrant for his arrest was issued this May.

He was found guilty of theft and ordered to pay a £300 fine, £200 in costs and a £30 victim surcharge at West Surrey Magistrate’s Court in Guildford last Friday.

This fine was later reduced because of his income.

Sergeant Adam Luck of Surrey Police said: “There have not been many finds of this nature in Surrey and an important part of the county’s heritage has been lost as a result of Smith’s dishonesty.

“Earlier this year the sentencing guidelines were increased for heritage crimes in recognition of the impact of these offences on our history and our culture.

“The successful conviction of Smith is the result of a lengthy and thorough investigation, which also included extremely effective joint working with other agencies, including Historic England, who is the font of all knowledge on all matter relating to heritage crime, the Portable Antiques Scheme and Surrey County Council.

“Smith’s conviction also demonstrates our determination to bring all offenders to justice as well as sending a clear message that crime never pays.”

“The actions of people like Smith, affects us all because they are damaging or stealing objects that we will never see or understand because they have been taken out of these sites with no care or record as to their history or context.

“The vast majority of detectorists comply with the law and have made a number of significant discoveries that have added to knowledge to our shared cultural heritage.”