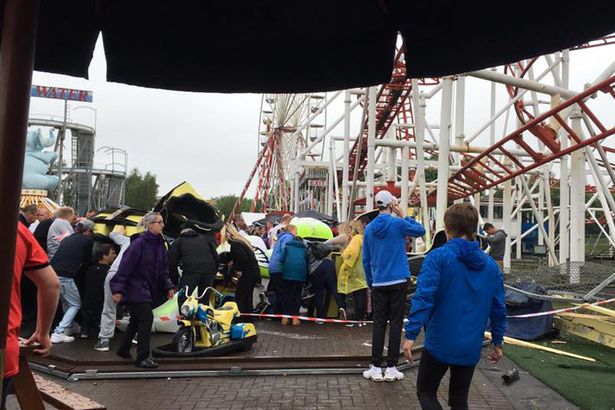 A teenager caught up in the horrific rollercoaster crash at M&D’s theme park has told how she feared she was going to die.

Katie Mcardle (corr) was enjoying a day at the theme park with boyfriend William Murray when the Tsunami rollercoaster went off the rails at 40mph.

The student was trapped upside down after the carriage she was in plunged 20ft down onto a children’s ride below injuring 10 people on Sunday afternoon.

Katie suffered a broken wrist and bruising in the accident, while William suffered a dislocated knee but escaped more serious injury.

On social media, student Katie from Hamilton, South Lanarkshire, wrote: “I have never been so scared in my entire life.

“Honestly thought I was going to die, sitting in that carriage upside down with everyone screaming.

“Turning round and not seeing William beside me was the worst. We are honestly so so lucky, there is definitely someone watching over us both.

“We are both still in shock and have a few injuries but just so lucky to be alive.

“Not seen William since it all happened but I here he’s doing alright.”

Katie said she had been “badly hurt” with bruises and a broken wrist and that her boyfriend was still being treated for a dislocated knee.

She added: “We are both badly hurt with bruises. I have a broken wrist and bruised and battered and Williams knee came out of place and he’s also bruised badly. I’m home now, but Williams getting kept in.”

In a later post, Katie said she was now suffering flashbacks from the horrific experience which left her damaged “physically, emotionally and mentally”.

She added: “Been having flashbacks all day and have been positive that I seen William fly out his seat.”

Katie and William were among eight children and two adults who were hospitalised after the Tsunami derailed and crashed to the ground.