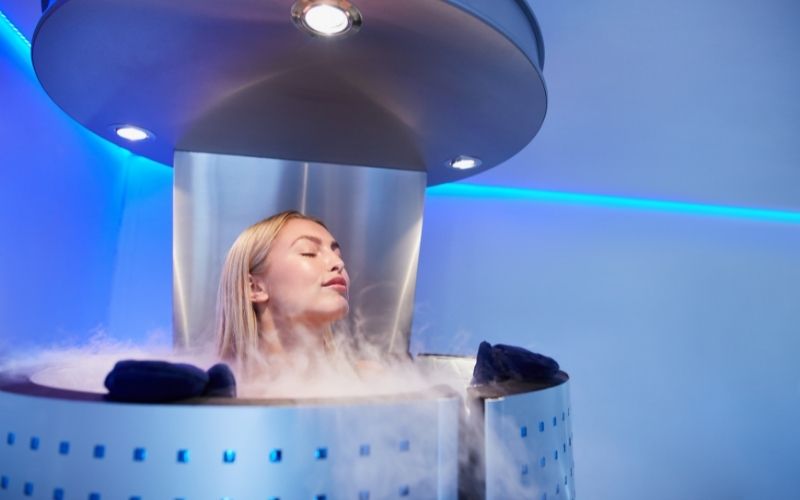 Cryotherapy is a technique widely used in sports, both prophylactic (to relieve after intense training and relax the muscles) as well as therapeutically (to treat injuries).

Cryotherapy, or also known as low temperature treatment, is a novel invention of physiotherapy, which is applied in different ways and with different effects, depending on the patient and his complications.

The main therapeutic effect of applying cold to the whole body is sedation, but other effects such as anti-inflammatory and circulatory processes also stand out.

Modern cryotherapy applied to the whole body is the most precise technology that works with the power of cold. Therefore, it is able to reach temperatures much lower than ice in a totally safe way.

If you want to understand the meaning of cryotherapy or “heat contrast”, the first thing you need to know is that the low temperature obtained comes from liquid nitrogen that acts as a nervous stimulus.

In other words, nervous reflexes are reactions that chain our body in milliseconds. And for this reason, the benefits of cryotherapy apply to a variety of areas such as sports, health and aesthetics.

For its part, in the field of sport, various studies have confirmed that short-term exposure (of the whole body) to extremely low temperatures significantly favors musculoskeletal repair.

Due to the above, whole-body cryotherapy is widely recommended for bruising, excessive exercise, and inflammation due to lactate removal.

It also improves athletic performance by releasing serotonin and endorphins into the bloodstream. Both substances quietly promote the mental balance needed by the most demanding competitors.

On the other hand, entering the field of aesthetics, body cryotherapy offers important benefits, let’s see an example: during the application of extreme cold, people burn up to 800 Kcal to retain body heat.

During this activity, fibroblasts collagen producers are activated and help fight insomnia and provide an immediate lifting (skin tightening) effect.

As a second advantage, cryotherapy is perfect to eliminate toxins and significantly improve the quality of the skin from the first application.

On the other hand, if we talk about health care, cryotherapy is used mainly to relieve acute and chronic pain. In addition, the anti-inflammatory properties that the cold provides (which have been known for a long time) are very useful for symptoms such as fibromyalgia and rheumatoid arthritis.

In addition, due to innovative treatments such as whole body cryotherapy, the brain releases large amounts of serotonin and endorphins into the blood, these are substances that help to reach the remote stage of sleep much faster and are excellent as anti-stress therapies.

Nerve reflexes are an automatic and immediate response to a sufficiently strong external stimulus, such as a sudden cold shock. These reactions are so fast that they cannot even be measured in time, in addition, they are completely involuntary.

Here are some important points about reflexes: as children (for example), when a doctor makes a small touch with an instrument similar to a hammer on the knee, it sends a stimulus to the child’s brain that responds by simulating a kick.

Is that a nervous reflex! and through this one has the ability to protect the child from the possibility of falling on something.

Similarly, the body cheerfully responds to cold or “heat contrast” to maintain our body temperature. Cryotherapy burns calories and generates heat through vasoconstriction and vasodilation. Many advantages come into consideration at this stage.

Having clarified the above, it should also be mentioned that neuro-reflexes effects are not possible in all cryotherapy cabins, since it is necessary that these can provide specific cold conditions.

Undoubtedly, the effects of cryotherapy on the human body (athletes or cosmetics) are many. There are multiple studies and tests that we will discuss below:

Being the extreme cold in the whole body, it interferes with the nociceptive fibers but at the same time slows down nerve conduction.

This treatment was originally developed to treat the symptoms of conditions such as fibromyalgia. The sharp point of pain throughout the body is very characteristic of him.

Effect of happiness and relaxation

Although it is a very little known advantage, it is undoubtedly the most appreciated. This type of therapy produces an immediate effect of relaxation and happiness thanks to the substances released by the brain: such as endorphins, serotonin and dopamine.

It is one of the most immediate and needed effects by the large population that uses full-body cryotherapy. The extreme cold on the skin causes a reduction of the hyperfusion that causes inflammation through vasoconstriction and intense vasodilation.

Added to this is a reduction in the neurological release of inflammatory mediators.