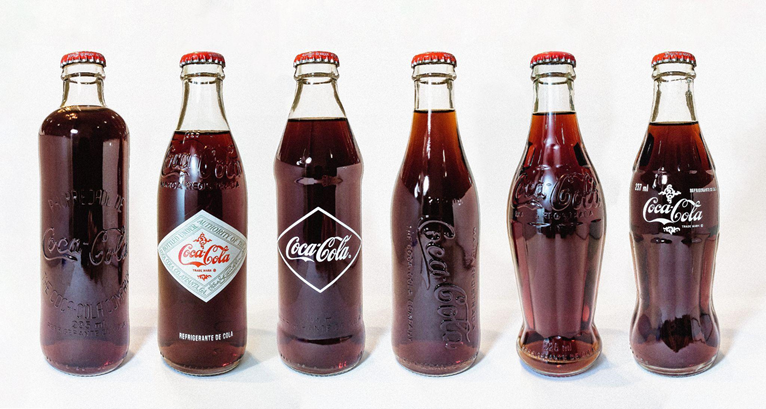 Industrial design is the practice of designing products, devices and services which are utilised by millions of people around the globe every day and dates back as far as the 1900s. Since then, the industrial design industry has developed exponentially, having impacted daily life in ways we often don’t even realise, with innovation playing a major part in the rapid growth of industries. In this article, we will explore some of history’s biggest and most inspiring examples of industrial design around the globe and how they have developed over time.

The Coca-Cola bottle is an excellent example of modern industrial design, with an instantly recognisable look for 100+ years now. Originating in the 1900’s, the first Coca-Cola bottle was introduced to consumers. ‘The Root Glass Company’ of Terre Haute, Indiana, helped to design the famous contour shape, which won enthusiastic approval from Coca?Cola in 1915 and was subsequently introduced in 1916.

In virtually every modern home today we can see one of these innovative designs, revolutionising households everywhere with the supposed ‘overnight sensation’ that is the bagless dual cyclone vacuum cleaner. At the time, the Dyson vacuum was entering the American market, the normal vacuum cleaner would have cost around $100. However, James Dyson convinced Americans that his bagless vacuum – with the more efficient  design – was worth three times the amount of others on the market.The Dyson brand may often seem overpriced compared to its competitors, though this is due to its overpowering suction which the vacuum offers. Dyson continues to dominate its market, being at the forefront of innovative industrial design for decades and showing no signs of slowing down.

The Volkswagen (VW) Beetle is notorious in design and its subsequent recognition. Over a decade before it went into production, the original chassis is recognised as being designed by Hungarian student Bela Barenyi in 1925. Thirteen years later, when production began in 1938, members of the public referred to the Beetle as ‘Volkswagen’ or the ‘People’s Car’. Later that year, The New York Times referred to the famous industrial design concept as ‘Beetle’ and the name has stuck ever since as a result.

Fun Fact: Many other countries have their own variation for the name. In France, it is referred to as “Coccinelle” which translates to ‘ladybug’. The Italians also call it Beetle but in their own language it’s “Maggiolino”. Bolivia uses the term “Peta”, which means turtle, and in Indonesia they use “Kodak” (frog) to refer to the car.

The notorious iMac by Apple was first introduced in 1998 by the late Steve Jobs – Apple’s co-founder and CEO at the time – before officially going on sale in August later that year, sending shockwaves throughout the industry and becoming the biggest selling computer that Christmas. The revolutionary design initially had one main goal: to allow its consumers to do the one thing they had been begging for, which was to  get onto the internet.

Fun Fact: The term ‘iMac’ was created by Ken Segall, who was employed with Apple’s ad agency. Jobs wanted to call it ‘MacMan’, but luckily, Segall convinced him otherwise. Phew!

The classic design concept of the Vespa Scooter is well-recognised for its connotations of Italian design aesthetics, although interestingly was influenced by Cushman scooters originating in the US pre-WWII. After aeronautical engineer Corradino D’Ascanio joined Piaggio in his design efforts, the infamous and familiar industrial design we know and love today came to be.