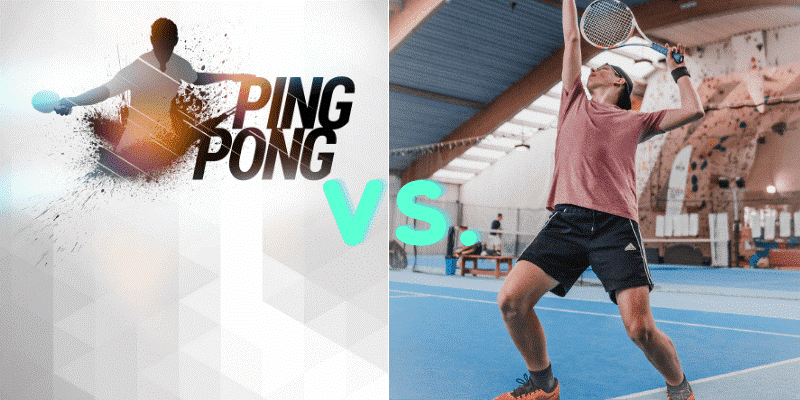 When most people think of tennis, they think of the popular sport played outdoors on a large court with a net separating the two opposing players.

On the other hand, table tennis is often viewed as a lesser version of tennis. While both sports share some similarities – like using a racket to hit a ball – there are also several key differences between the two games.

In this blog post, we’ll take a closer look at these differences and explore why table tennis is a lot more than just “ping pong.” Stay tuned!

Similarities between tennis and table tennis

The game of tennis has many similarities to the sport table tennis. Both games require players to aim their shots in different directions. For example, while moving around a court with an opponent who also tries to score points by throwing balls at them from various locations on said terrain (or surface).

Both tennis and table tennis have been around for centuries. They are two of the most popular games that people can play on a court, indoor club, or at home with friends (depending on how big your living room).

The similarities between these sports go beyond just their popularity; there’s also some technicality shared between them too!

Both tennis and table tennis are great ways to get in shape, but they also benefit from being fun!

If you’re looking for an activity that will challenge both your mental and physical health, I recommend giving these sports a try.

Tennis is a higher-priced sport than table tennis. The annual cost for playing club matches can run anywhere from $100 to over 2000 dollars, depending on where you live and what type of court surface your association has available at its facility!

Tennis coaching is an expensive sport, but it’s worth every penny if you have the money.  A good coach will improve your game regardless of what kind or level player you are.

Tables and equipment for table tennis are not cheap. A new standard rubber paddle can cost as much as $30, while an excellent serving net might set you back another 30 dollars or so, depending on the brand/model desired by your coach of choice!

In general, table tennis is more affordable than tennis.  It’s also easier to find a place that rents tables because they don’t take up as much space and require less maintenance work on behalf of the tenant!

Players on the tennis court need equipment to play their sport correctly.  They must have a good racquet and excellent shoes and other items such as balls or uniform caps with logos of teams they represent (for example, Nike). There are many types, so let’s look at some popular ones!

Tennis players need to be in top physical condition, which means they’ve got some serious workout equipment.

The most important items in a table tennis player’s equipment are their paddle and ball. The paddles should be light but durable while still producing good shots with power behind them; this will help you win more games!

Various types were used for the latter part of the last century, including wood (which gave off an “old-school” vibe) aluminum alloys/composites for increased sensitivity. Due to its lower weight compared to steel or graphite plastic blades that offered better spin rates than previous materials yet weren’t too cheap.

The type of racket may also depend on your skill level or intended purpose-from beginner levels that require lighter rackets while practicing at home alone before playing against other players all the way up through professional grade.

Table Tennis has a short net, low bounces on the ball (making it easier to hit), no center serve because of how close together their respective courts get at different points during play-time. In contrast, there’s always room for an ace when hitting from behind your opponent’s backline!

Tennis is a sport that has different rules than table tennis. In tennis, the server must keep one foot outside their own court at all times and can’t touch either side of it with any part of their body before receiving permission from both sides’ opponents (or not).

The ball cannot be dropped, nor Faces Of The Earth marked when playing doubles matches because this would give away who gets to take first serve in certain situations like tiebreaks or deciding quite année (“which year”) occurs during changeovers between halves. So, there’s always some strategy involved!

Table tennis has different rules than tennis, but they are great sports for wasting time and exercising your mind.

The difference between the two games is that only one player can hit a ball at a time in table tennis.

In other words, there are no rallies where both players keep hitting back and forth to each other. In contrast, in tennis, you have long exchanges with different people on either side of the net, going back and forth for points! So if you want more action on your court, play some ping pong instead of tennis 😉

Table tennis is a fast-paced, competitive sport with many skill levels. We hope this blog post has helped you understand the difference between table tennis and other related games like ping pong or football.

We hope you’ve found this blog post to be informative. If you are interested in learning more about the differences between tennis and table tennis, please visit our website to break down these two games completely.

Remember that different strokes work best on certain surfaces – so make sure your game is tailored to the court!