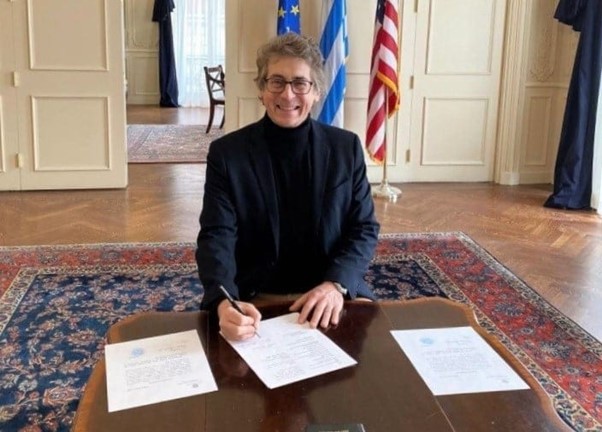 Opa! Two-time Academy Award-winning screenwriter and director Constantine Alexander Payne can celebrate his brand-new dual citizenship. On Feb. 8 the American-born Payne officially became a Greek citizen during a break from filming The Holdovers in Boston.

Payne was born and raised in the United States  – in Omaha, Nebraska, to be exact — by parents of Greek heritage. “He has proven once again that he does not forget his family’s heritage,” stated Dendias.

“I’m a Greek from Omaha,” says Payne. “My grandfather arrived in Omaha around 1912 or 1913 still named Nikolas Papadopoulos.  But in 1909, there had been an anti-Greek riot, so by 1915, he saw fit to change his name and not to Poulos or Pappas, which a lot of Greeks do to shorten it. Instead, he chose totally to Americanize it.”

He says growing up in Omaha as a Greek American, “I was certainly as American as, well,maybe not apple pie but apple baklava, but always with the sense of subculture and looking from inside the bubble of being Greek American.”

His family is from three different regions of Greece — the island of Syros, Livadia, and also Aigio. According to the filmmaker, the southeastern European country “energizes my DNA,” and he wouldn’t rule out living there, at least part time. “I have no concrete plans, although I do have the urge to move to Greece, not permanently for a while, learn Greek well, finally, and use my movie camera as a way to tell a Greek story and in doing so find out more about myself.’

“I have worked hard since the beginning of my career,” says Payne.

In 1990, he graduated from UCLA’s film school with a master’s degree. His student film The Passion of Martin got his foot in the door of Hollywood, and then his feature debut, the dark comedy Citizen Ruth, earned him instant attention when it premiered in 1996.

“I want my films to be charming and entertaining,” says Payne. “Isn’t a good narrative always about people bumping up against their limitations, flaws, hubris, delusions, discrepancies? They want the wrong thing, or they want the right things, although going about it the wrong way. That’s what makes a drama.”

How does he accomplish that? “I approach [all of my film projects] as comedies,” Payne explains. “When I was reading the script for Nebraska, I read it as a comedy, but with the moments of gravity or realism to anchor it emotionally.”

That’s a recipe for success; he’s proven it repeatedly. In addition to Citizen Ruth (1996) and Sideways (2004), he’s co-written Election (1999), Jurassic Park III (2001), About Schmidt (2002), and Downsizing (2017) with writing partner Jim Taylor. Alexander Payne won the Best Adapted Screenplay Academy Award for Sideways in 2005 and for The Descendants in 2012, which he dedicated to his mother, Peggy, in Greek!

Yet, there’s nothing flashy about the filmmaker — he’s firmly focused on making the best movie possible and telling authentic stories of the human heart. Growing up in Nebraska has proven to be a source of inspiration for his screenwriting endeavors.

“Coming from Omaha and being the grandson of Greek immigrants, becoming a film director was a distant dream,” Payne admits. “Now I like filming there. Others know Nebraska as a place that they fly over or drive through. But I still live there most of the time and enjoy shooting my films there. If you make a decent product or write a great screenplay, success will come to you.”

The Importance of Preserving Hollywood History