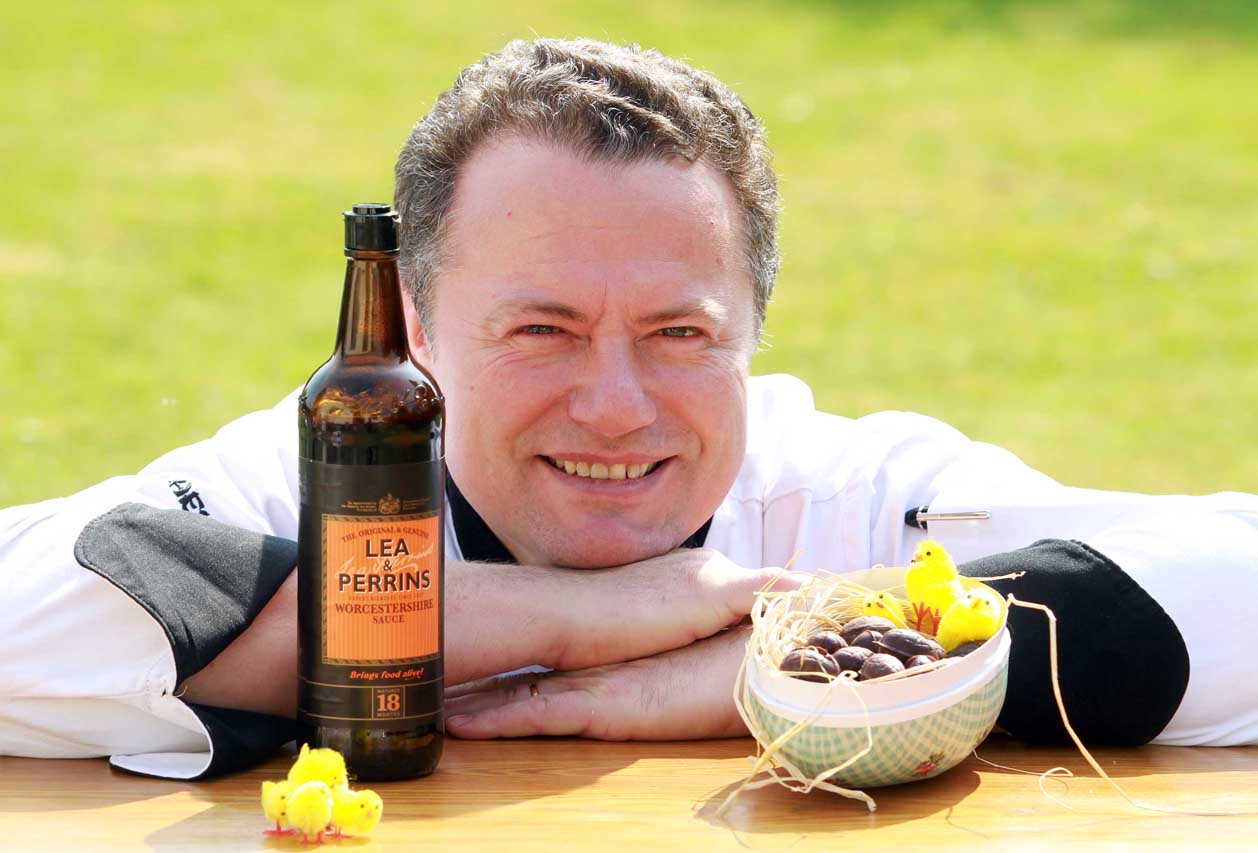 THIS weekend chocalcholics can enjoy a treat with a twist after a curious chef created a bizarre WORCESTER-SAUCE flavoured Easter egg.

Foodies whose taste buds tantalise at the sweet and savoury will love the eccentric egg, which has Lea and Perrins Worcestershire Sauce in the centre.

The condiment – more commonly used in bollognaise and cheese on toast – is mixed with apples and makes up the filling in the egg.

He got the idea from his native Italy, where he says Easter Eggs have a surprise in them.

Mr Tocchini, who runs restaurant Fusion Brasserie in Stoulton, Worcestershire, continued: “We have lots of apples in Worcestershire so it started from there. And because it’s Easter I thought let’s do it the Italia way and put something special in them

“Worcestershire Sauce goes incredibly well with apples. It is a nice combination.”

The eggs are being given away to diners at the restaurant for free during the Easter period.

“Everybody who tastes them can’t put there finger on what is in them, but they like them,” the chef added.

“They don’t expect Worcestershire Sauce to be in them.”

It is not the first time the Italian has got people’s taste buds tantalising with his unusual concoctions.

The eggs are the latest in a long line of weird and wonderful foods created by the chef.

He was the brains behind the Burssel Sprout Smoothie, Stilton Ice Cream and the world’s most dunkable biscuits.

Last year he also made a white chocolate asparagus cake, which was very popular with the punters.

Mr Tocchini said: “We are very lucky that the majority of our customers are good sports. They are used to being guinea pigs.

“We are always looking for strange things.”

And customers have reacted with mixed opinons to the unusual treat.

Chris Savage, a 24-year-old IT consultant, said: “I love Worcester sauce, I put it on everything and this tastes really good. It’s a great idea and I hope they do it again next year.”

However receptionist Ashley Thomson, 33, disgareed and said: “Everything about it is just wrong. Its okay on cheese on toast but in an Easter egg is a bit weird.”

The master of gastronomic curious made the eggs to celebrate the launch of a tourism leaflet in the county.

Produced by Destination Worcestershire, the food and drink leaflet provides tourists and residents with a taste-bud tantalising tour of the county’s many producers and retailers including a map and listings for restaurants, pubs and cafes.

It also mentions some of Worcestershire’s other weird and wonderful foods including Worcestershire dunkers – the world’s most dunkable biscuits – and Stilton Ice Cream.

The Brussel Sprout Smoothie was served at the chef’s restaurant before Christmas.

The vegetable, enriched in selenium, was transformed into a beverage by combining it with orange juice, carrots, ginger and cinnamon.

It went on sale for GBP2 for the smoothie and GBP3.20 for the alcoholic cocktail and was developed from a new ‘Super Sprout’ which was harvested last year.

Research has found that strange and interesting recipes and ideas have long been popular in Worcestershire.

In days of yore in the colder months when there were few sweet things to be had, the good people of the county would serve meat or fish with custard for pudding.

Worcester sauce was created by chemists John Wheeley Lea and William Henry Perrins.  Their popular brand dates back to 1837.