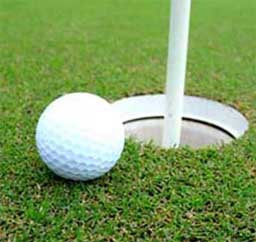 AN AMATEUR golfer has defied odds of 100 million-to-one by sinking two hole-in-ones on the same course – incredibly the 11th of his career.

Lucky John Richardson was astonished when he achieved a career 10th hole-in-one after 21 years of playing golf – before immediately grabbing his 11th just five holes later.

Mr Richardson was playing in a seniors match at Worcester Golf and Country Club when he achieved the incredible feat on Monday.

The 66-year-old plays with a handicap of 11 and astonished those he was playing against with his hole in one on the eighth hole and then repeated the feat on the thirteenth.

He said: “The two who me and my partner played against just could not believe how I was playing.

“I’m just lucky I guess – but the feeling I got when I walked into the club house afterwards  was like walking out of the tunnel at Old Trafford. There was an almighty roar.

“I was the the talk of the club and I’m still on cloud nine to be honest. Even after 11 of them.”

The former flower-seller hit the holes-in-one on the eighth and thirteenth holes, which are between 140-160 yards long.

“I didn’t see the first one go in but I could see the second one drop – along with everybodies jaws,” he joked.

“Everybody was just stunned.

“My son holds the course record so I thought I on course to smash that. Unfortunately I didn’t.”

Mr Richardson has been a member of the club since 1997 and has overcome a number of health problems.

“I had my first heart attack aged 39, I’ve had three more since then and three big brain operations for eight aneurysms, which they reckon is some kind of record too,” he said.

“But I’m still here and I’m still playing golf, and I live every day to the fullest.”

David Williams, Ladbrokes spokesperson said the odds of getting 11 hole-in-one’s was upwards of 100 million to one.

He said: “A hole-in-one is the holy grail for every golfer. To get a handful of them is unheard of, to get a few is incredible, but to get 11 is surely one of the most incredible things I’ve ever heard of in sport.

“Obviously we’d like to congratulate Mr Richardson and hope his celebratory bar bill was not too punitive.”

Peter Treadwell, the club secretary, said: “What John has achieved is absolutely remarkable – I don’t think he even realises how remarkable it is himself,” he said.

“Golf pros spend their whole career trying and don’t even get one hole in one – it is truly amazing.”

John’s 63-year-old wife, Jenny, said: “What he’s done is absolutely fantastic, he’s had a lot of illness over the years and this has just given him a big boost.

“He just loves his golf and it’s kept him fit and going, he had his first heart attack when he was 39 and he’s 66 now and it’s helped him battle through. To have this happen is just lovely.”