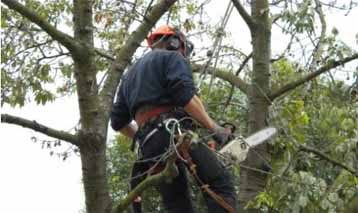 A TREE surgeon is fighting for his life after nearly chopping off his head with a chainsaw.

The 21-year-old severed all the major blood vessels in his neck after slipping while using the chainsaw on a tree on Thursday.

The unnamed man was completing a job in Guyhirn, Cambridgeshire, at about 3pm when he fell leaving him with the horrendous injuries to his neck and arm.

After receiving treatment, which is normally used to help treat seriously injured soldiers wounded on the front-line, he was taken to Addenbrooke’s Hospital in Cambridge by air ambulance.

He was given life-saving treatment by emergency surgeons who were waiting for him at the hospital.

He is now described as being in a stable but critical condition in hospital.

Antonia Brickell, spokeswoman for medical charity Magpas whose doctors were among the first on the scene, said the man had suffered severe loss of blood as the result of his injuries.

She said: “The 21-year-old was just finishing his job when he slipped and the chainsaw cut his neck.

“It also wounded his arm but when ambulance paramedics arrived their main worry was the injury to his neck, as with injuries like this you can lose a lot of blood in a short space of time.

“He was fully conscious when we arrived and he had to be carefully lifted out of the tree.

“He had to be sedated, before a wound-packing gauze called Cellox was packed into his neck.

“Cellox is used on soldiers in Afghanistan.

“Because the wound was so severe his neck also began to swell and he was having difficulty breathing. As a result he had to be given oxygen.

“He was then put in the helicopter and taken to Addenbrooke’s Hospital where emergency surgeons were waiting for his arrival so he could get immediate surgery.

“Our staff said he is a really lovely man who had just been involved in a horrific accident.

“The bandages used to stem the bleeding from his neck are very specialised.”