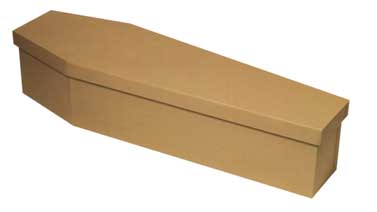 FUNERAL homes are cashing in on death by selling cardboard coffins for almost THREE TIMES more than the wooden alternative.

Eco-friendly folk who want green funerals are being forced to fork out up to GBP605 for a cardboard casket, a big increase on the recommended retail price of just GBP168. With average funeral costs reaching nearly £4,000, a large number of over 50’s are afraid of affordability and looking into alternative options, such as prepaid funerals

It is also much more expensive than a wooden coffin, which will typically set you back GBP235.

Rosie Inman-Cook, who runs charity The National Death Centre, said: “There is a huge mark-up on the price of these coffins, as well as other types, because this is where funeral directors make their profit.

“Their customers are in such a state of shock that they will pay anything. They are not in any fit state to question costs.

“But there is a huge problem with over-charging on cardboard coffins by some companies.

“The recommended retail price for a standard casket of this sort is GBP168, and there are some companies that do sell it for that amount. But there are others who push the price up.”

The Midlands Co-operative Funeral service offers one of the most expensive cardboard coffins.

An outlet in Castle Bromwich, Birmingham, quoted GBP605 for one.

One of the cheapest firms, Greenfield Creations, charges GBP171 for a standard brown casket with rope handles, although costs rise to GBP325 for a patterned product.

The cardboard caskets are able to hold weights of up to 26 stone. A reinforced bottom, if required, costs an extra GBP10.

“The cheapest wooden coffins are sold to the trade for around &pound;30,” said Ms Inman-Cook. “The mark-up on these is a lot.

“Not all funeral directors charge high prices, and you can find firms who will break down the costs for you. But there is a problem of complete transparency within the industry. I think people need to be prepared to shop around.”

A spokeswoman for Midlands Co-operative Society, said: “There are many suppliers of cardboard coffins that offer a range of designs and qualities.

“As with all our coffin ranges we have researched our suppliers so that we offer a selection that suit sall budgets without compromising on quality.”

A recent survey revealed thatr two-thirds of British adults want to be buried in a cardboard coffin.

Sixty-three per cent like the idea of an eco-coffin and 64 per cent want to be buried in a woodland or meadow. Green funerals are so popular that there are now more than 200 natural burial sites in the UK.