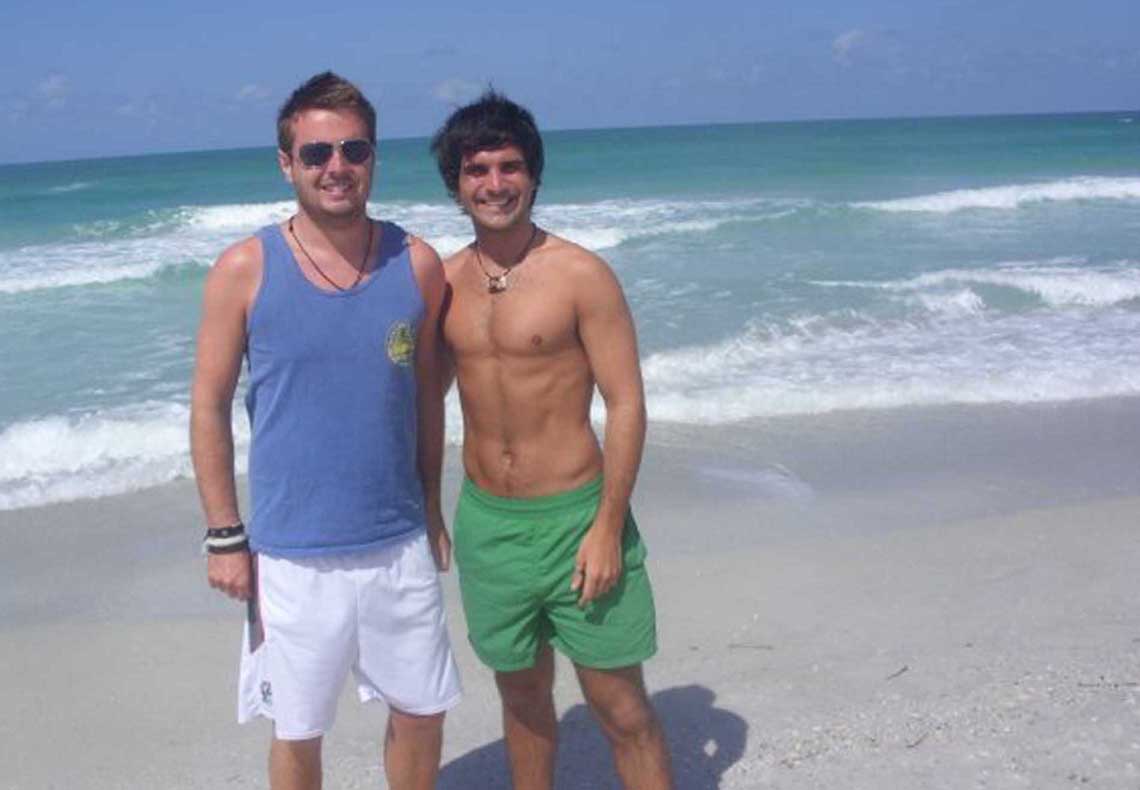 TRIBUTES have been paid to two close friends who were gunned down during a street robbery in Florida.

James Cooper, 25, from Hampton Lucy, Warks, and James Kouzaris, 24, of Northampton, died within metres of each other after being shot in the coastal town of Sarasota.

A 16-year-old boy has since been arrested on suspicion of murder.

Back in Britain, two communities reacted in shock to the tragic deaths of the two well-liked friends, who had met at university and had travelled together.

There was no comment from the Cooper family at their GBP850,000 countryside mansion who were said by neighbours to be ‘utterly distraught’ with some fearing it would  push James’ father Stanley ‘over-the-edge’.

Mr Cooper,a tennis coach, was described by the close-knit community of Hampton Lucy, Warwickshire, as an outgoing and fun character.

Neighbours said the family were ‘a loving close knit group’ – with James being an only child.

“They are lovely,” said one former friend, who chose to remain anonymous. “James was always a great junior tennis player and continued that as a coach. His parents, Stan and Sandy, were also great players.

“I think Stan used to work for the BBC, then he took early retirement and they moved out to the countryside.

“He’d been a completely straightforward bloke till then, but he suddenly started to suffer severe depression.

“For some reason living out there and not working did him no good, this is going to hit him hard, I worry it will tip him over the edge.

“James was a stand up fellow, it’s so very sad to hear what’s happened.”

Another neighbour, who also wanted to remain anonymous, broke into tears at the news of James’s death.

“It’s just so sad,” she said. “They were such a lovely family, so loving. He was a lovely boy.

“It’s horrific, he was an only child, they’ve lost so much now.”

A friend of Mr Kouzaris, called Alex Foster, wrote on his Facebook page: “RIP James kouzaris, such a Shame mate. You were a great guy- it’s a great loss X”

The friends met while at the University of Sheffield and today/yesterday (MON) former lecturers and colleagues paid tribute to them.

Dr Jon Burchell, Senior Lecturer from the University of Sheffield’s Management School, paid tribute to Mr Cooper, and said: “James Cooper was a student in the Management School and was one of my personal tutees.

“During his time in Sheffield, James was an enthusiastic and hard working student, and was popular among his peers.

“He had a good sense of humour and a range of plans for what he wanted to do after graduation. I am immensely shocked and saddened by the news and send our deepest condolences to his family.”

Ed Ferrari, Research Fellow from the University of Sheffield’s Department of Town and Regional Planning, said: “It is with immense sadness that I learned today that one of our former students, James Kouzaris, was tragically killed in Florida. I was James’ personal tutor in 2008 at a time when he was completing his four year degree course in Town Planning.

“James was committed to his studies and was a skilled planner but, more than that, he was a friend to many in our department.

“His positive outlook and humour were infectious and he involved himself totally in the life of our department and University. He was just the sort of student any lecturer would hope to have in their class.”

Hundreds of messages had poured onto the Facebook wall of Mr Kouzaris.

His cousin Gemma Knight, worte:  “Sorry it has took me so long to write but yesturday I could hardly breathe with the shock!! Jam, all I can see is your face when I close my eyes!! There are not enough tears to mourn our loss!!!

“SO many memories!!! You were the kindest, most genuine, beautiul person I have ever met & I am so proud to call you my Cousin!! Thinking massively of the Family & will ALWAYS be there for them!! I dont understand why such a good man was taken when he had so much to give the world!! The world will never seem right again!!! RIP Jim Jam, watch down over us & keep us all safe!! Sleep tight, love you xxxx”

Another pal Loz Jeffrey, said: “cant believe this has happened to two of the nicest genuine blokes, you are such a lovely guy Jam who is going to be missed by everyone who knew you. You are an amazing guy who had a heart of gold.”