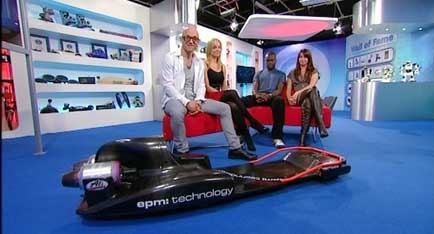 TV presenter Jason Bradbury nearly died when he crashed at 100mph – but now he’s risking his life again in a bid to break a world record.

The star of The Gadget Show is determined to be the fastest man in the world on a jet-powered luge, despite having what he describes as `a Richard Hammond moment’ when his first attempt went dangerously wrong.

He turned to a Formula 1 manufacturer to help him power his street luge – a bigger version of a skateboard on which you lie on your back – with two mini jet engines.

Jason, 41, was on course to break the 118mph world record when he skidded. It had echoes of the crash suffered by Top Gear presenter Richard Hammond in 2006 in a jet-powered car.

“The next thing I knew, I was in the middle of a field in Norfolk,” remembers the TV star.

“I walked away, but I could have been killed. There was some concrete at the side of the runway and I almost hit it.

“It was a total Richard Hammond moment.

“But I’m quite prepared to have another go. The front end was too light and it was damp, so we’re going to the Utah salt flats in America in June.

“It’s much wider and a better environment for me to crash in a safe way.

Daredevil Jason sounds far more concerned about his next challenge – Saturday night primetime television. He’s the presenter of new BBC1 gameshow Don’t Scare The Hare, in which families have to carry out challenges while trying not to scare a four foot high mechanical hare.

“I am worried,” admits Jason, who’s been busy presenting Gadget Show Live all week at the NEC in Birmingham to 140,000 fans.

“Don’t Scare The Hare is a major series with big production values – one show costs more than a whole series of The Gadget Show.

“I’ve been doing The Gadget Show for seven years and I’ve rested on my laurels a bit. I want to take a risk.

“There’s a lot of pressure on me to make it work, I don’t know who they thought they were employing. I feel in many respects like the scruffy one at a smart wedding.

“The whole show is completely nuts. It’s filmed in a vast studio, with a forest, leafy glades and farmyard animals.

“We live in an enchanted world, like Alice in Wonderland. I think they wanted me in the Johnny Depp role of the Mad Hatter, but they’re got the alternative version with big ears and nowhere near his looks.

“It’s a bit like the Crystal Maze and I’m like Richard O’Brien, their guide to a mystical, fantasy world.

“The hare is seriously cute. If Apple made mechanical hares, he’d be it – he’s like an iHare.

“I showed my kids a picture of him and they laughed out loud. It’s the first TV thing I’ve done which they are interested in.

“They go to bed before the Gadget Show is on. I tried to show them a clip the other day and they fell asleep.”

Jason has three children – five-year-old Marnie, Jackson, three, and one-year-old Harrison, and has been engaged to Claire for nine years. Has she resorted to leaving bridal magazines around the house as a hint?

“No, she’s not the type,” smiles Jason. “I’m more likely to push for marriage than she is. People ask when I’m going to make an honest woman of her, but it’s the other way round.”

Don’t Scare The Hare starts on BBC1 on Saturday at 5.25pm.