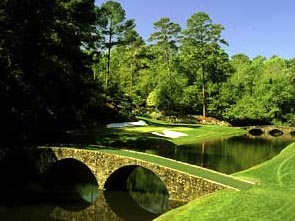 THE stunning azelea-lined home of the upcoming Masters Golf Tournament has been named as the greatest-sporting backdrop in the world.

The Augusta National Golf Club, in Georgia, USA, which will this week play host to the prestigious golfing tournament topped a poll of the best location to play sport on the planet.

The picturesque 7435 yard course, famous for its stunning water features, winding creeks and challenging holes beat off competition from some of the most iconic venues in the world.

The iconic street circuit, whose grid is packed with most of Hollywood’s A-list every year. winds its way past some of the richest hotels and apartments in the world, sending multimillion pound racing cars through streets that are normally limited to a more sedate 20 mph.

But even those gaudy surroundings couldn’t match the eye-catching beauty of the Augusta National, which has been the sole host of Golf’s iconic Masters since 1934, steeped in the memories of the likes of Jack Nicklaus, Nick Faldo and Tiger Woods.

Veejay Lingiah, Director of Vivo Healthcare, who conducted the survey of 1,500 people, said: “Sport doesn’t have to just be about tiring hard-work, people can get healthy in some of the most exotic locations in the world.

“There are so many great sporting arenas to chose from, but its perhaps fitting that Augusta comes top – it really is one of the most special places on earth to play golf.

“When you look at the divers at the Barcelona Olympics, with the sprawling city behind them and the Tour De France cyclists winding through the Pyrenees you really do have some iconic images there.

“And every sport-fan in the world would love to visit the MGM Grand in Vegas for a boxing match or the MCG Boxing Day cricket.”

The Tour De France’s crossing of the Pyrenees came in third place followed by the MGM Grand in Las Vegas, host to a host of the world’s most famous boxing matches.

The 1992 Olympics’ diving board, silhouetted against the Barcelona skyline, just beat the home of golf, St Andrews. The world’s oldest golf course was surprisingly unable to come close to Augusta in the survey.

Closer to home the sights of the London Marathon, which takes in the Cutty Sark and The Mall on it’s 26 mile route, and Wembley stadium made the list. Wembley most likely for it’s history, having hosted matches from amateur trophy finals to the World Cup final across its more than century long history.

Green Point Stadium in Cape Town, overlooked by Table mountain, and the MCG, packed to the rafters with cricket fans on a boxing day, make up rest of the list.

Mr Lingiah added: “It comes as little surprise that the British general public hold the London Marathon and Wembley Stadium with such high regard and quite rightly so.

“And despite the performance of our national team, it seems like the World Cup is still in everybody’s minds as the stunning images of Table Mountain as seen from Cape Town’s Green Point Stadium featured high in the list too. ”