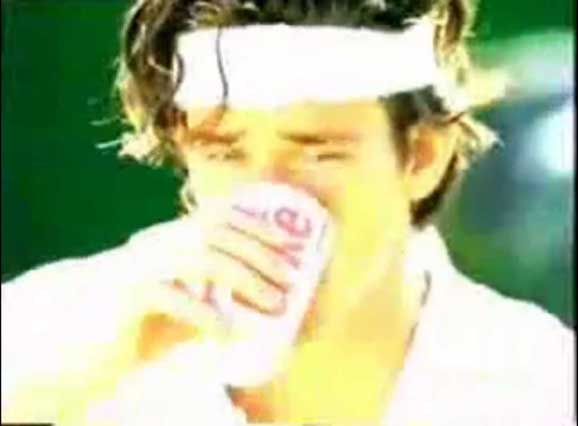 A FORMER international model who cheated death in a 14,000 ft sky diving accident has astounded doctors by walking again after being told he’d be wheelchair-bound for life.

Christian Moore – best recognised as the face of Tizer and as a ‘Diet Coke Man’ – has incredibly rebuilt his life following the horror-fall which saw him slam into the ground at 50mph.

Christian was devastated to be told he would ‘definitely never walk again’ by Spanish doctors but after amazingly teaching himself to walk again – the hunk is now looking to relaunch his modelling career once again.

He broke his back in the skydiving accident in Ocana, near Madrid, in Spain in 2007, suffering horrendous injuries and only surviving due to his own quick thinking.

Christian had been taking part in the jump in remembrance of the death of his brother two years before.

He had done the same jump a year earlier, after a five day course, however he claims his refresher course was not thorough enough on the day of the accident.

Coming in to land Christian’s life was changed completely when he miscalculated his landing and slammed into the ground at around 50mph, landing straight on the base of his spine, an accident that most do not survive.

“Ironically, considering I’d been the face of the Tizer ‘refresh your head’ campaign, my head was anything but refreshed as my landing turned into an impact,” said  Christian, who now lives in Fulham, West London.

“It was an unimaginable pain, so big I couldn’t make a proper sound out of my mouth.

“I have some medical training, so I knew I had to keep my head in line with my spine, my legs felt like they were someone else’s, but I could use my arm to take my helmet off and prop my head up.”

An ambulance was called, but the crash site was so remote that it took what seemed like an eternity for help to arrive.

“The Ambulance took two hours to get to me, but it felt like 10 days, time slowed down as I was in agony,” Christian said.

“We were bouncing around all over the place on the way back, I was screaming to them in Spanish that I needed a helicopter, because these bumps were the worst possible thing for a spinal injury.’

When he eventually arrived at hospital it was discovered that he had broken his Coccyx was told his L1 vertebrae had “exploded”, partially severing his spinal chord.

Christian spent a total of seven and a half months in three different hospitals in Spain and back in the UK.

Eventually finishing his recovery at Stoke Mandeville hospital in Buckinghamshire.

“When I was in Spain the surgeon told me: ‘There is, without a shadow of a doubt, no chance that you will ever walk again’.

“I had to be horizontal for months, not even one degree off. I wore a plastic brace for months around my back, they nicknamed me the Ninja Turtle.”

But despite the devastating news Christian refused to give up. Determined not to be stuck in the confines of a wheelchair Christian had to teach himself to walk again from scratch.

“I was determined, I couldn’t stand the idea of not being able to stand up, I had to walk, I just had to walk again,” he said.

“I have no feeling in my bottom, the back of my legs or my feet, so I have to use my core strength and my calves in order to hold myself up. Walking takes a lot of concentration, and now I love being upright.”

As well as the injuries to his leg Christian has to put up with severe Post Traumatic Stress Disorder.

“It’s also the invisibility of my disability,” he said. “People look at me and think I’m fine because I can walk. But inside I’ve gone through hell, and I still go back to that day all too often.

“I hated that, that was another reason I had to get walking, the mental stress that people with disabilities go through is horrendous.”

Now Christian is trying to rebuild his career as a model and inspire both able-bodied and disabled people to do things they never thought they could.

“I’ve seen campaigns with disabled people, I want to join them, so we can show people what you can do with self belief,” he said.

“I want to use my experience, and the inner strength that I’ve found, and what I’ve been through to help them. I want to show people coming back from Afghanistan that there is still hope.”