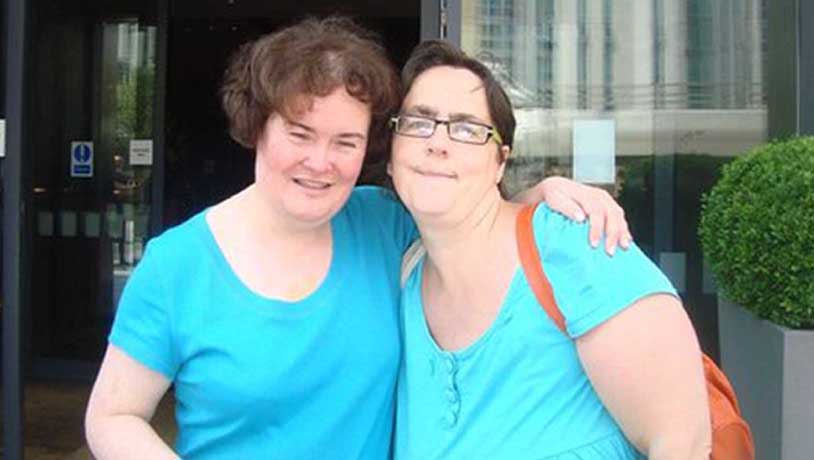 A MOTHER who claimed her children were disabled in order to receive over GBP112,000 to fund her obsession with celebrities has been jailed for two years.

Jayne McKnight, from Wolverhampton, claimed her four children had epilepsy, when in fact only one suffered from the condition and that her van-driver husband had gout.

The 45-year-old went and spent the cash she received in fraudulent tax credits on concert tickets to see boy bands and backstage passes – touring the country to meet her celebrity idols.
On social networking sites she can be seen posing with the likes of Susan Boyle, Ronan Keating, JLS and Ashley Cole with one album even entitled ‘my famous mates’.
She followed boy bands including Westlife, JLS and The Wanted on tour with her daughters, Samantha, 17, and Melissa, ten as well as travelling to X-Factor and Britain’s Got Talent auditions to meet contestants.
At Wolverhampton Crown Court today/yesterday (MON) Barbara Webster, prosecuting, said Mrs McKnight had begun claiming tax credits fraudulently in 2003, following a previous genuine claim.

In total McKnight claimed GBP112,147 in the years running up to her arrest.
The court heard that during this time the computer systems of the Department for Work and Pensions (DWP) and HMRC were not linked in any way,

allowing her to continue to claim.

McKnight worked out how she could claim through meticulous research.  Before adding an extra claim she rang up the helpline designed to help people with genuine claims and asked what would happen should she have another disabled child.
It was not the first time McKnight had claimed benefits fraudulently. In 2000 she was given a suspended seven year sentence for four fraud offences and 127 other offences.
The latest tax credit fraud began less than two years after the period of suspension ran out on her first conviction.

According to Robert Perry, defending, McKnight’s husband contributed nothing to the household income and was an alcoholic.
He said money claimed had gone on rental arrears from their current house and previous ones.  McKnight also had two outstanding personal loans totalling over GBP 13,000, which Mr Perry says were also for paying rent arrears.
During this time she was also paying over GBP 2003 a month on the loan of a car.
In sentencing McKnight to two years in jail Judge Amjad Nawaz said she had known exactly what she was doing.

“You must have lead a good lifestyle who doing this, ” he said. “You researched everything you did and deliberately defrauded tax payers.
“You are someone who is well practiced in lying and fraud.  You used a system that is in place to help honest tax payers with their claims.
“It is quite clear that you abused the system so as to assertain which benefits you could apply for.

“Each time you researched it you added an extra child,  seemingly one every year.
“You lied about your own children.

“You are not of good character. You are someone who has done exactly this before. ”
Mike O’Grady, Assistant Director, Criminal Investigation for HM Revenue & Customs said after the case: “Between 2003 and 2010 Jayne McKnight consistently lied about her circumstances knowing full well that this would increase the amount of money she was awarded.  She probably thought she would never be found out, but she was wrong.
“We are investing GBP900m in our drive against fraud – be that tax avoidance, evasion or criminal attack – and we will investigate suspicious claims and pursue fraudsters.  We have a duty, the ability and the determination to do so.”