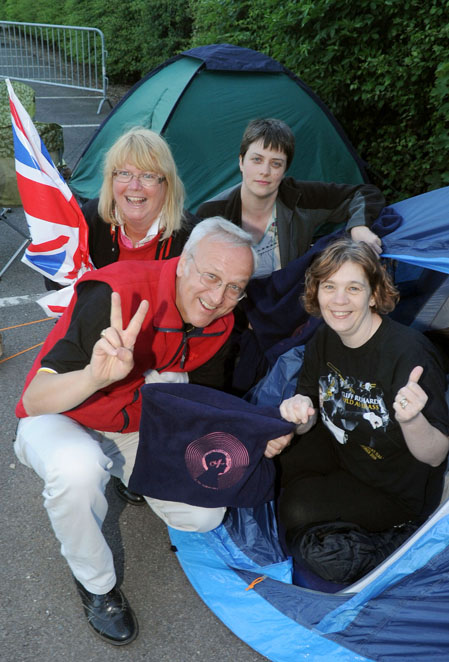 DIE-HARD Cliff Richard fans have began queuing for tickets for one of his shows – almost a WEEK they have even gone on sale.

The first fans appeared on Monday camped outside Birmingham’s NEC ahead of tickets going on sale on Sunday.

Despite this, a small group have turned up on the car-park of the arena armed with sleeping bags and thermals determined to secure the best seats.

Among them is 35-year-old security guard Alison Hadley, from Walsall, West Midlands.

The mother-of-one, who set up camp at 9am on Sunday, was one of the first to arrive and intends to buy the maximum allocation of six tickets for her and five friends.

“Camping out is all part of the experience,” she said.

“I’ve seen Cliff about 30 times over 11 years and every time it gets better.

“I might be able to get a ticket if I came Sunday but there is a better chance if I queue now.”

Wife and husband Sally and George Rab also set up their small tent at 9am on Sunday after travelling from their home in Fradley, near Lichfield, Staffs.

Not wanting to damage the concrete, they have used bricks to keep their tent down to ensure it does not blow away.

Mrs Rab, 52, said she has seen Sir Cliff in concert hundreds of times in locations including France, Germany and the Netherlands.

She has camped on virtually every occasion to buy tickets, once in thick snow outside the Royal Albert Hall in London and once for three weeks.

“The reason I do it is because I want to be in the front row,” she said.

“If you try and buy tickets on the telephone or over the internet, there is a much smaller chance of getting a good seat.

“Once I tried to get a ticket for one of his concerts over the internet and I was in tears because I could not get through. I can’t risk it.”

Mother-of-two Paula Parker, 42, from Nuneaton, said she remembered her first concert at the NEC in 1989.

“There were hundreds of screaming fans,” she said.

“I was screaming the place down.

“The crowd was fabulous. He opened with We Don’t Talk Anymore and it has been my favourite song ever since. I only have to hear the tune and I get really emotional. It takes me back to when it all started.”

She added: “For me to see Cliff, I’ll do anything.

“Spending a week in a carpark is nothing. I would not risk waiting until Sunday. I’ve been there. Computers crash, phone lines jam. This is the only way you can guarantee walking out with a ticket.”

Produced and directed by David Gest, The Soulicious Tour will see Sir Cliff perform a selection of his greatest hits as well as duets with his soul guests.