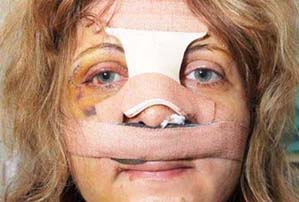 THIS is the bruised and beaten face of a brave woman who dared to stand up to a vicious thug who had stolen her handbag on a train.

Petite Letitia Murphy was on her way home after a long day at work when she was violently assaulted after challenging the mugger who had tried to steal her bag.

The 40-year-old was repeatedly battered in the face by the brutal thief who left her with a fractured cheek and requiring surgery to insert metal pins into her face.

Now the quietly spoken interpreter has now called for the man -described as a ‘punching machine’ – to be caught ‘before he kills someone’.

“I thought I was going to die,” she said. “He just would not stop punching me. The doors of the train opened and I just collapsed onto the platform.

“His first punch was like being hit by a car, he was so strong, it just smashed the bones in my face. All he seemed to want to do was smash my face.

“When the doors opened someone shouted at him and he ran away, if they hadn’t he could have carried on punching me like a robot until I was dead. It was like a punching machine. The attack was so vicious.

“I try not to think about it and remember that I was in the wrong place at the wrong time, but I live in fear sometimes, he needs to be caught before he kills.”

Mrs Murphy caught a train at 11.40pm from Tame Bridge station in the West Midlands at the same time as her attacker, who had been dropped off at the station by a silver Audi A4.

Police believe the man may have lived in Aston and appealed for the driver of the car to come forward to help with their investigation.

Brian Price, from the British Transport Police said: “When the train pulled into Aston station in Birmingham at midnight she felt a tug on her handbag. The offender grabbed her it and made to run off.

“Letitia grabbed hold of him as he ran off the train,  and chased him down the platform. He turned and assaulted her, causing severe damage to her face.

“He was spotted by the station manager who chased the offender before he dropped the bag on the station step.”

The CCTV images released by the police show Letitia crawling out of the train and immediately collapsing on the platform.

Mrs Murphy has since had to undergo extensive surgery to rebuild her face following the attack, including the insertion of metal plates.

“They had to put these plates in my face,” said Letitia, a police interpreter. “They are in there to push the bones back into place.”

Det Con Anne Joyner, also from the British Transport Police, said: “This was an opportunistic attack by a dangerous offender, we need to catch him as soon as possible and bring him to justice.’

The suspect is described as a black male, in late teens to early twenties, about 5ft 10in, of medium build. He was wearing a black shiny jacket, red hat and was carrying a bag.