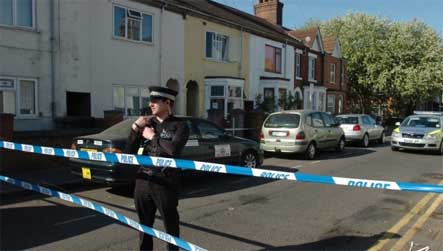 A HEROIC neighbour braved deadly smoke to repeatedly plunge into a burning house to save the lives of four people.

Courageous Ali Hasan, 28, smashed his way in to his neighbour’s house in Millfield, Peterborough, Cambs, to find a woman lying on the kitchen floor with her arms on fire, screaming for help.

He said: “I dragged her out and she told me there were others in the house.”

Pausing only to alert the fire service, Mr Ali charged back into the house and frantically searched for other survivors.

He found another man collapsed by the front door and pulled him outside before racing upstairs where he discovered two other men, who he helped out separately.

As Mr Ali, an assistant manager at fast food outlet KFC in Peterborough, brought the fourth victim out of the house, firefighters arrived to take over and found another two men in the building, who they brought out.

Mr Ali said: “The fire started about 11pm on Sunday.

“I heard an alarm go off and went outside and there was no one around.

“It all happened so quickly, I panicked and didn’t know what to do but I couldn’t do nothing. If I hadn’t managed to break the door down they could have died.

“When I got inside I saw this lady with burning arms but I couldn’t understand what to do. I just put her in my arms and ran out.”

Despite barely being able to breathe himself, Ali – who shrugged off suggestions that he is a hero – returned to the house to help the other people inside.

“The smoke was so thick and painful I couldn’t even open my eyes properly.

“I had to keep running in and out to breathe.

“I am not a hero but I couldn’t let another human being die.”

The whole ordeal lasted about six or seven minutes and countless trips inside before firefighters arrived.

Mr Ali’s heroics left him shaken and with burning lungs but he refused treatment and returned to work yesterday morning at KFC.

He said: “It was pretty bad. I had painful lungs. It was quite stressful so I didn’t sleep, my head was buzzing all night.”

Two people were taken to Peterborough City Hospital for smoke inhalation and a third suffering from second degree burns as well as the effects of smoke but none were thought to be in a serious condition.

Police were treating the incident as a crime scene while fire investigation officers established the cause of the blaze.

Officers threw up a cordon around the scene, closing off the end of the street to preserve any evidence.

A spokeswoman for the fire service said the investigation into the cause of the fire was ongoing.

Ward councillor Nazim Khan, who witnessed some of the incident, said: “I believe the residents were asleep at the time but Mr Hasan has saved their lives. He should be commended in some way for his efforts.