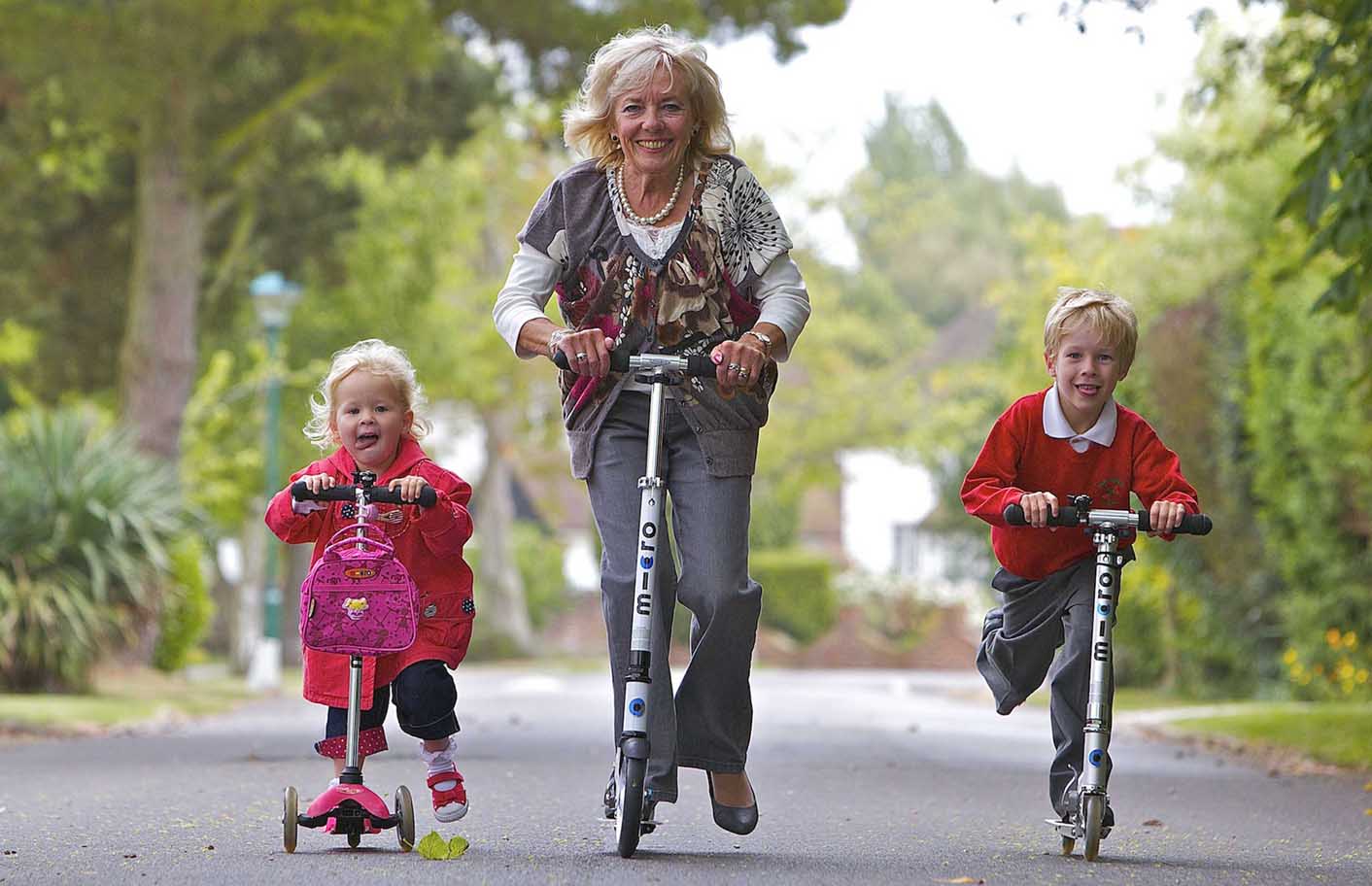 SCOOTERS on the school run are often a common sight, but here’s something you won’t see everyday – a scooter-riding granny dropping off her grandkids at the gates.

Like many helpful grans Angela Nelson takes her two grandchildren on the school run – but where most mums fold up their children’s scooters and carry them home, she takes to two wheels and rides along with them.

The idea of riding with her grandkids Bonnie, three, and Hadley, six, came to 71-year-old Angela when she saw them using the popular toys and she wanted to have a go herself.

“The grandchildren got scooters for Christmas and I thought ‘I’d like to have a go at that’,” said the silver-haired scooter rider from Felpham, West Sussex.

“I’d never ever ridden a scooter before, and I’d never owned one as a child because of the war, but when I saw one I thought ‘that looks good’ and that’s how it started.

“Instead of wheeling the scooter to school I road it down there.

“I took to it very quickly.”

Many of the other parents and grandparents at the school couldn’t believe their eyes when they saw Angela rolling up to the gates on a scooter.

Angela said: “At first people didn’t like to remark on it, but I could hear them saying things about it.

“The teachers even asked me ‘is that Hadley’s scooter?’, and when I said ‘no it’s mine’ they thought I was teasing them.

“But people have got used to seeing me on it now.”

Young-looking Angela said that she feels much fitter since taking to the scooter, and that it has helped her get some exercise.

She said: “I did feel fairly out of breath initially, but I don’t now. It’s only if I’m battling against the wind that it might be difficult.

“I’m not usually one for exercise, but I love riding the scooter – there’s a lot of freedom to it, and I prefer it to a bike.”

She’s become so used to riding the scooter that she doesn’t just use it for school runs, but also for getting around to visit friends.

She said: “I often use it if I’m going somewhere – especially to visit other people’s houses.

“Though I don’t tend to use it to go to the shops as there isn’t anywhere to put my bags.”

And while some people complain about elderly motorists, Angela insists that her scootering career has been free from accidents.

She said: “I’ve never had any accidents, I don’t thump it down pavement edges and things like that.

“I think you have to be observant but it’s a safe way to get around.”