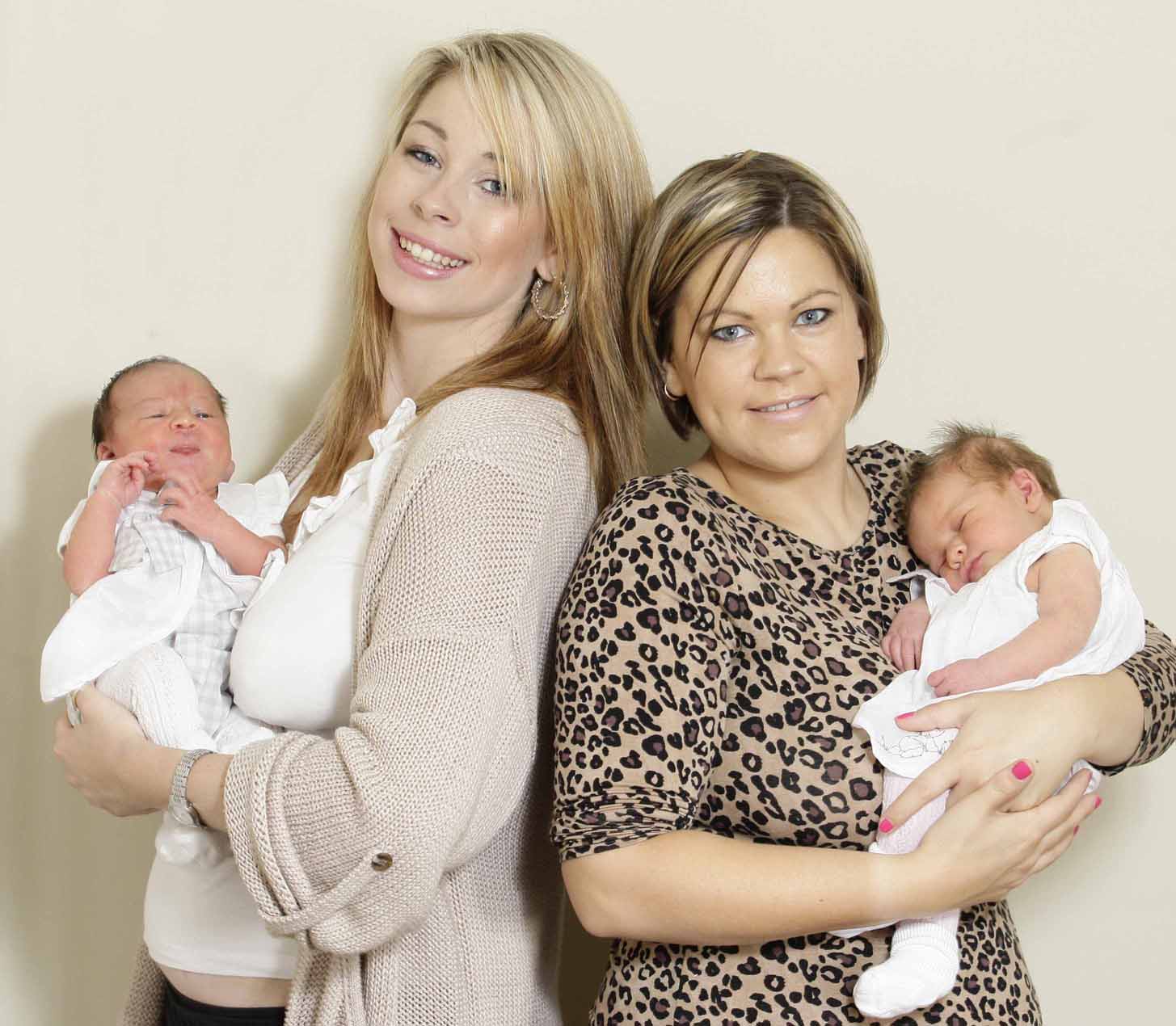 TWO sisters have defied extraordinary odds after they both gave birth to baby girls on the same day and in the same hospital ward – just hours apart.

Shocked sisters Rebecca and Rhea North saw in their double celebration after giving birth within just hours of each other to the delight of their families.

Rebecca, 25, was due to give birth on May 19 – just one day before her sister – but little Jessie-Mai wanted to wait for her cousin Esmai-Rose, and put her mum through a 24-hour labour after she was induced.

The new mums were also on the same ward and in opposite beds when the little cousins were born on Friday at the Royal Derby Hospital – both weighing 8lbs.

As well as the new arrivals sharing a birthday, birthplace and birthweight, the mum’s went on maternity leave on the same day and work for the same company.

Rhea, 22, from Oakthorpe, Leicestershire said: “”It was lovely having Rebecca there, sharing the experience. We kept saying to each other, ‘My baby’s doing this and that’.

“Now our daughters will grow up together and I’m sure they’ll be great friends.

“It is quite unusual but it is really nice. We are really close. We do a lot of things together.

“When we got admitted to the ward we were in opposite beds and were both up in the night together and had each other to talk to about it all – it was really special.”

Rebecca, 25, who lives nearby in Measham, Leics, said: “It was really strange having my baby the same day as Rhea, but it was also really nice.

“I came back into the ward after giving birth just as Rhea was coming in, halfway through labour.

“Rhea always hated it when she copied me or the other way around when we were little, but we don’t mind so much now.”

One person who had double the worry was the sister’s mum, Glynis, 53, from Donisthorpe, Leics.

She had two hours sleep after being at the hospital with Rebecca when it was Rhea’s turn.

She said: “Rebecca was in the hospital in Derby all night and I was there with her.

“I had two hour’s sleep and then I was up and back in for the next one being born.

“It’s been scary and tiring and stressful but lovely to have them all back home.”

“It is lovely that they are going to share birthdays and will be able to have joint parties. Hopefully they will be as close as we are. You don’t get much closer than being born on the same day.

“It was really nice to experience it together,” Rhea, an office administrator for a toy manufacturer, continued.

The sisters work for the same company in Leicestershire and live in villages next to each other.

It seems the new arrivals were destined to come into the world on the same day as both sisters overcame complications before and during their pregnancies.

Rebecca was told she might not be able to have children after being diagnosed with polycystic ovaries. But a scan revealed she had a cyst on her ovaries and was in fact in the early stages of pregnancy.

One week later Rhea found out she was pregnant.

“It was even more of a shock when we found out our due dates were one day apart,” Rhea said.

Just days before Rhea gave birth she had to go to hospital as a sickness bug took hold and could affect the baby. But then she went into labour not long afterwards.

Rhea added: “It is almost like it was meant to be, that they were meant to come together.”

Rebecca, who works in the factory for the same toy manufacturer, said Jessie-Mai, who is her first daughter with partner Sean Austin, was worth all the effort.

She said: “It was all so overwhelming and hard work but it was worth it all – she’s brilliant, bless her.”

The new babies also share the “mai” at the end of their name.

Rhea said: “When Rebecca told me about the name she wanted to use I suggested having the different spelling of ‘mai’.

“Then I decided to use it for my own daughter, too.”

Bookies say the chances of so many coincidences occurring come in at around 182,000-1.