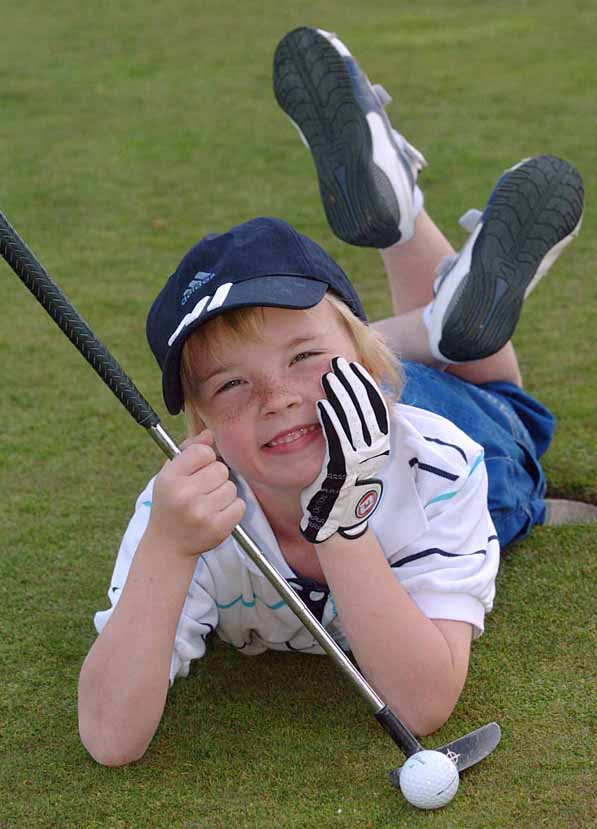 A SIX-year-old boy has qualified for an international golf tournament won by the likes of Tiger Woods and Ernie Elis – just weeks after picking up a golf club.

Little Sam Gwilliams has already made his mark on the golfing world after winning one of the few selected places available at a prestigious junior contest.

Sam only started swinging a golf club in his back garden recently – after watching golf comedy film Happy Gilmore and his parents enrolled him at a local club to help him enjoy his hobby.

And now – just weeks later and after only five lessons with a pro – young Sam has won one of the few places available at the Callaway Junior World Championships in San Diego in America.

He earned his place after being named runner-up at a regional competition.

Proud parents Alison and Andrew, from Annscroft, Shropshire, knew he had a special talent when he started hitting balls for miles in their garden.

Alison said: “We’ve got a third of an acre of garden and he was hitting it over the fence at the back into a field, and hitting it quite straight.

“He seemed to be really enjoying it, so we enrolled him in the junior section at Arscott Golf Club.”

Sam’s ability was discovered after he watched the hit film Happy Gilmore staring Adam Sandler and was bought a golf club by his parents to play with.

He started going to nearby Arscott Golf Club, where he quickly made an impression.

Coach Jack Roberts said he had “never seen anything like it” and that the youngster was “improving every time”.

Sam will compete from July 12 to 14 in the same tournament dominated by a young Tiger Woods in the late 1980s and early 1990s.

He came third in the under six category at a qualifying event at 3 Hammers, near Wolverhampton to win his place.

A gobsmacked Alison continued: “We had no idea how good he was as we couldn’t compare him with other six-year-olds.

“He joined the golf club shortly before the Easter holidays and he has only had five lessons with the pro and a couple of group sessions.

“We were gobsmacked when his name was called out as one of the qualifiers and shocked he has managed to do it.

“A lot of the other children he was up against were sponsored and had been playing golf with coaches for a number of years. Sam has just picked it up in the last few months.”

His proud parents are hoping he can go on to be a star at the sport. But they face a desperate fight to raise more than GBP3,000 in sponsorship to pay for the three of them to travel and stay in America during the tournament.

“We do not want Sam not to have the opportunity to go. He has only been doing this for a couple of the months and his coach thinks he will be a star –  kids don’t just pick up a club and do what he has done,” his mum continued.

The Junior World Golf Championships in California is the largest event of its kind, featuring competitors from more than 50 countries.