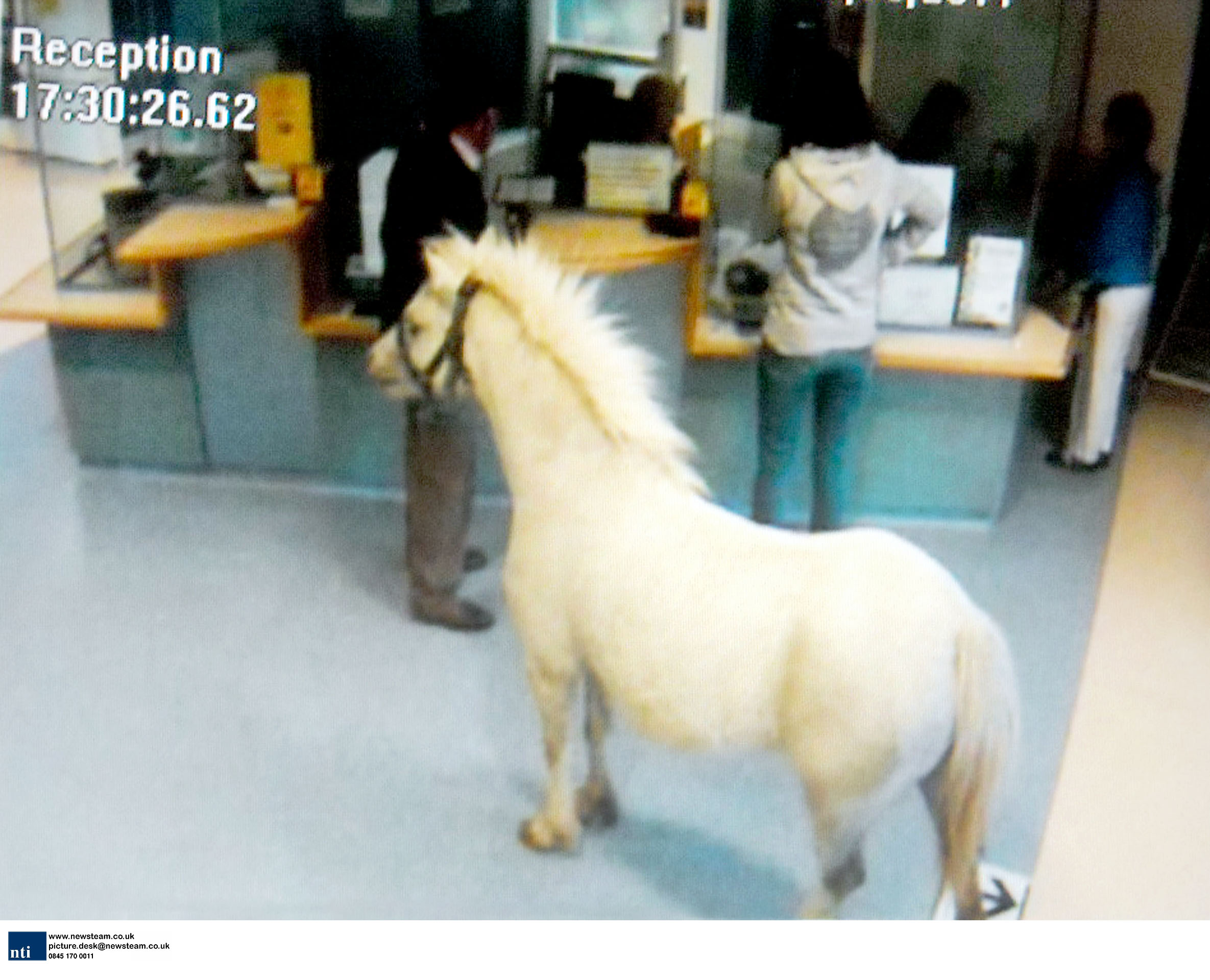 A MAN caught trying to board a train with his horse was captured on CCTV 24 hours earlier trying to get treatment for his four-legged friend at a hospital’s A&E department.

The animal was caught on CCTV waiting in line at the reception desk at Wrexham Maelor Hospital’s emergency department last Friday.

After requesting whether doctors could treat the pony’s infection – security politely asked the man to leave much to the bemusement of patients and staff.

Trystan Pritchard, spokesperson for North East Wales hospital trust said: “He walked in with his horse at 5.30 on Friday to the hospital’s emergency department and asked whether he could get his horse looked at.

“Amazingly, he told staff that his horse had some kind of infection and wondered if they could help make him better.

“Security naturally came over to interject and after explaining to him he would have to leave – the matter was resolved.

“He was confrontational or anything like that – he just left of his own accord but seemed surprised he was turned away.

“Staff members were just perplexed. It was a very odd situation indeed.”

Another hospital worker, who did not wish to be named, said: “Everybody was just in shock. I think he was politely told to go to a vets, but he seemed a little bit gutted about that.

“It couldn’t have been very hygienic but everybody found it absolutely hilarious. It’s been the talk of the town -but nobody knows who he is.”

The RSPCA said it was concerned and was viewing all CCTV tapes – including sightings of him in a pub.

The first emerged after the man tried to get on the train at Wrexham General station with the white pony in tow, but other sightings have since been revealed.

After the conductor refused him entry to a train, the man returned to the ticket booth where he tried to buy two tickets – for himself and the animal.

Extraordinary pictures showed the pony pictured in a lift at the station last Saturday,  walking along the platform and the counter of the ticket office.

Katrina Tzannis, a spokeswoman for Arriva Trains Wales, said yesterday/on Wednesday  “Horses and ponies, which may pose a risk to the general public are not permitted to travel.

“I think he believed he had a right to catch the train because he turned up with the animal and queried the refusal to board at the ticket office.

“I think staff at the station were very surprised and also very confused.

“We’re used to having guide dogs and other small pets but I’ve never heard of anything of this magnitude turning up at our stations.

“I have no idea who he is or where he was going to but it was certainly very unusual.”

The man tried to travel on Saturday’s 1902 BST service to Holyhead on Anglesey with his four-legged companion.