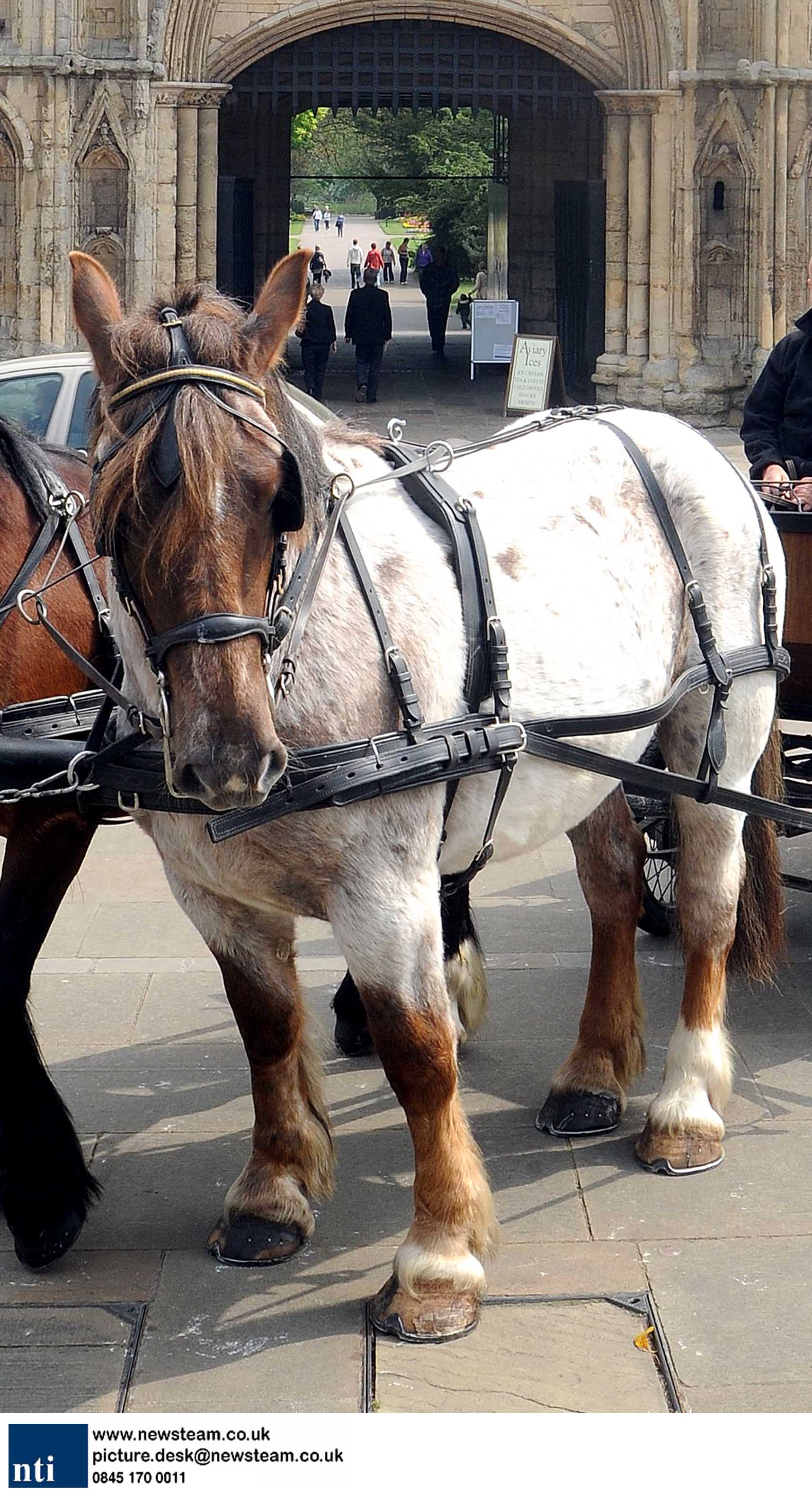 THIS is the first picture of a horse which killed a woman when it bolted free at a country fair over the weekend.

Lucas, a Breton gelding, dashed free towards terrified crowds of people at the Nowton Park County Fair, in Bury-St-Edmunds, Suffolk.

A 57-year-old woman was caught up in the stampede and suffered serious injuries when she was trampled.

She was taken to Cambridge’s Addenbrooke’s Hospital from the park on Sunday and died Monday morning.

Seen here outside the towns historic Angel Hotel in April, four year old Lucas, who was rescued from a French meat market, is pictured with driver Duncan Drye.

Eyewitnesses said the horse bolted down the Bury St Edmunds park’s lime tree avenue, which was lined with stalls and crowded with people.

DCI Nick Bennett said at the scene yesterday evening that the police were waiting for the Health and Safety Executive to arrive.

He added: “There has been an incident involving a horse and carriage during the course of which several people were injured including one lady who has been taken to Addenbrooke’s Hospital. Her injuries are potentially life threatening”

At least seven people were taken to at West Suffolk Hospital all were treated and discharged.

Ruth Brighton and her mother Carol Ortega, who run the Bury based Fairy Cahoots card and gift business, saw the carriage hurtle past their stall. Ms Brighton said: “Unfortunately there was a mass of people watching a demonstration at the bottom and they got no warning.”

Mrs Ortega said: “The horse hit a man and knocked him down and he was dragged with the carriage. The horse went down on his knees – I’m sure he was trying to stop. It was horrendous. It was an awful end to a lovely day.”

The pair saw people diving out of the way as the horse ran past, including a woman who threw herself from a wheelchair. In the chaos that followed an angry man from the crowd hit the horse.

“That broke my heart,” Mrs Ortega said. “I told him to leave it alone.”

The horse and carriage are from the company that recently started running carriage rides around Bury, but they were using a smaller carriage than the two-horse vehicle they us in town, drawn by a single horse. The horses live at Nowton Park.

Police said the owners were not available for comment pending the Health and Safety investigators’ arrival.

This is believed to have been the first serious accident at the annual country fair, which has been organised by St Edmundsbury Borough Council for 22 years.

Lucas, was set to be sold for meat at a market in Duras when he was rescued last September. Lucas was bought by Duncan Drye, owner of the Carriage Tours of Bury St Edmunds.

After months of care, attention and special training, Lucas joined a team of horses pulling visitors in carriage tours around the historic sights of Bury St Edmunds.

A spokeswoman for St Edmundsbury Borough Council, which staged the event, said the council would work with the Health and Safety Executive (HSE) to carry out a full investigation.

“Our thoughts are with those who were injured and a full investigation will be carried out by the HSE and the council.”

Police ask anyone who witnessed the incident to contact them.