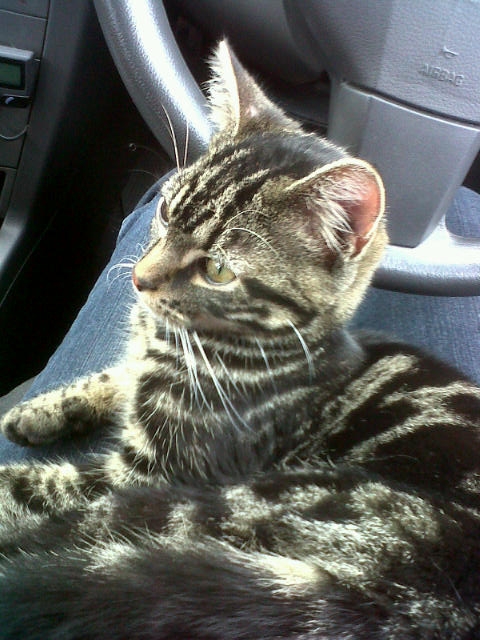 THIS lucky kitten narrowly avoided a ‘catastrophe’ when he was found clinging to the engine of a car following a 20-mile journey.

The young cat – aptly named Frazzle  – miraculously survived speeds of up to 70 miles along the M42 from Bromsgrove to Small Heath, Birmingham, before he was discovered under the bonnet by the stunned driver.

Marie Kitley, who found him, said: “I was utterly stressed when I saw him – I opened the bonnet and there he was looking up and staring at me.

“He was hanging onto a thick pipe that led into the engine.

“I didn’t touch him, in case he was stuck.

“He somehow got out by himself through the wheel arch.”

Marie, a real estate manager for Virgin Media, left him in the car with the window wound down a bit while she went to a meeting and ended up taking him to her next appointment in Sheldon, Birmingham.

Frazzle had been at her house in Sidemore in Bromsgrove, Worcestershire the night before her unscheduled journey when a neighbour brought him round.

She said: “The neighbour had found the kitten, which kept following him around.
“I took him in, gave him some food and a bed.

“He kept crying, so I put him out at 4am and thought no more of it, got up and went to work.

“I didn’t drive off immediately, I must have left the engine running for a couple of minutes.

“It wasn’t until I got out of the car that I heard him crying and opened the bonnet.”

After having no luck with an animal rescue centre, Marie took him to the vet’s to have him checked out.

Unfortunately, there was no microchip, but the vet estimated Frazzle was around seven-months-old.

Marie said: “The only souvenir from his epic journey is a bit of a bald patch on his ear which was caused by heat from the engine.

“I can’t really keep Frazzle as I’ve already got two cats of my own, although I’m becoming very attached to him.

“I’m having to juggle things at home.

“I don’t know whether Frazzle has been dumped or whether he’s a stray – I just know he’s a very lucky kitten,” she added.