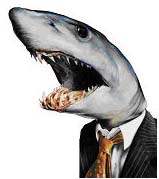 LOAN sharks targeting desperate people in the grips of the recession remain free from prison because victims are terrified to give evidence in courts, a report revealed.

Reports of illegal money lending have flooded in to investigators from victims over the past three years, but few were brought to justice – and no money was reclaimed in either 2008 or 2009.

The figures were released for 50 reports in the West Midlands by the National Illegal Money Lending project – or “Stop Loan Sharks”.

Only six people from the reports were brought to justice.

“Loan sharks are very nasty, both in the way they operate and in getting their money back,” Tony Quigley, head of the team, said.

“Victims are often too intimidated to stand up against their lender – and if they are the only witness, it can leave them open to risk.”

“Our first priority has to be the protection of the victim.”

The National Illegal Money Lending team consists of 55 staff, including investigators, police officers and community liaison officers, all Birmingham-based, and part of a Government-funded scheme set up to tackle the problem of loan sharks across England.

“Investigations can come to a standstill for other reasons too – it’s difficult to get enough solid evidence for a conviction, or it might be that inquiries are still ongoing,” he said.

“It can take up to three years to pin someone down.”

He said the team had seized weapons including machetes and baseballs bats from loan sharks who used them to intimidate or beat money out of their victims.

Mr Quigley added the number of people brought to court was only a fraction of the number of loan sharks estimated to be working in the area.

The project, which has a budget of GBP5.2 million pounds for 2011, has managed to get GBP37million worth of illegal debt written off across the UK since it launched in 2004.