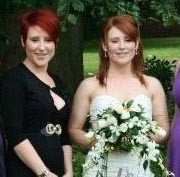 FAMILY members of the victims of a horror crash that claimed four lives on Sunday spoke out about their grief at the tragic deaths of their loved ones today.

Paul Withers, the brother-in-law of Tracy Chambers said: “”She was just like her sister, she was happy, bubbly, always enjoyed herself.

“They are quite a big family, they’re close and they all live local to each other.”

Withers, a 29-year-old carpenter, spoke outside the home he shares with Tracy’s twin sister Teresa, who was also involved in the crash but managed to survive.

“They say she[Teresa] was lucky, from where she was sitting, she didn’t have a seatbelt on and she landed between the two seats,” he said.

“That made it easier to get her out of the car.

“She’s having an operation on her left elbow this afternoon, she fractured it.

Moving floral tributes to the four victims lined both sides of the busy road at the scene of the crash.

Some were tied to a lamppost alongside a pink teddy bear and various cards.

Another tribute to 40-year-old Joanne Ralley, who was traveling in the same car as her daughter Kelsey, read: “Dear Jo, You touched our lives in so many ways, You made your mark that brightened our days, you were there for us in times of need, God bless you my friend, we will miss you indeed, all our love, Linda, Gaz + Liam x x x”

One friend’s tribute to 21-year-old Ashley Simpson had a can of Relentless energy drink placed next to a bouquet of flowers.

The friend wrote: “Ash, can’t believe your gone, you will be truly missed but you will never be forgotten.

“You was a great mate who I had some great memories with.