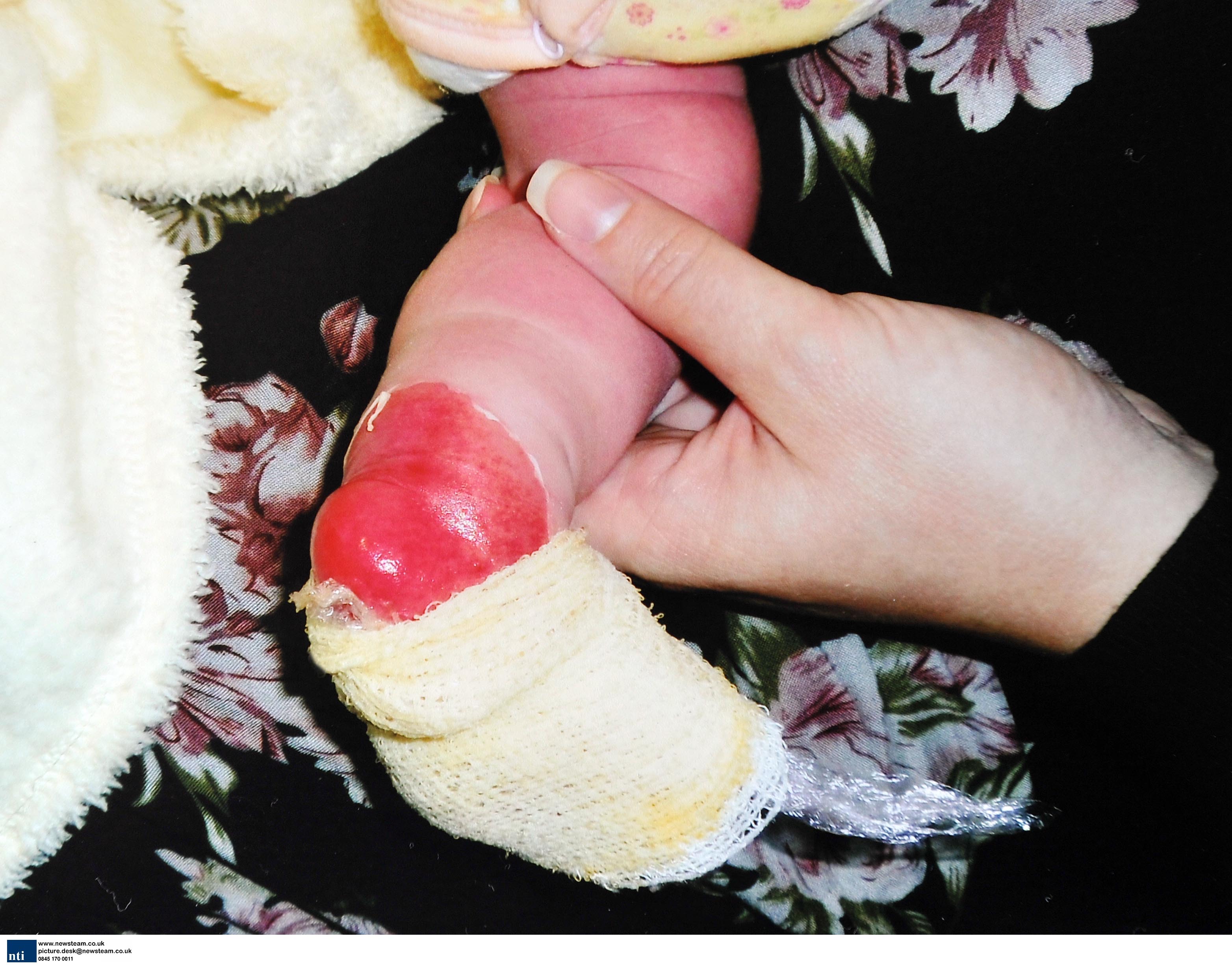 A MOTHER today told of her devastation after her six-day-old baby daughter was badly burned when a trainee midwife plunged the infant’s foot into a bowl of scalding hot water.

Little Katie Ward was left with skin hanging off her tiny foot after it was dipped into the ‘almost boiling’ water much to her mother’s horror.

Distraught mum Julie now faces an agonising wait to find out whether newborn daughter will need skin grafts or even be able to walk normally.

Julie was present in an upstairs bedroom at the family home at in Acton Trussell, Staffordshire, when the accident occurred.

The 40-year-old said that two midwives from Stafford Hospital, one of them a student, arrived to carry out routine tests on May 15, just six days after she had given birth.

They asked for a bowl of hot water but did not say that it was for a heel prick test.

For the test, the baby’s foot is warmed with water before blood is taken from the heel to be tested for birth defects such as cystic fibrosis or a blood disorder.

Julie’s mother Kathryn unwittingly filled a bowl from the hot water tap in the kitchen downstairs and even warned the midwife that it was hot.

But Katie’s entire foot was dipped into the water without testing its temperature.

Julie said: “I heard this howl and I turned round and saw the skin on her foot hanging off.

“I was frantic and I started crying. Her foot blistered over and we took her to hospital. I haven’t seen or heard from the midwife since.

“I’m angry, because it shouldn’t have happened, but I’m more upset for Katie.

“She’s my little girl and she was just six days old – one minute she’s ok and the next she’s in pain.

“She might have to have skin grafts through no fault of her own, I don’t know if she’s going to have problems walking.

“I’ve got to cross my fingers that won’t happen.”

Single mother Julie added: “She’s fine now, as long as she’s not having her foot messed with.”

Julie said there was a qualified midwife present at the time but that she was not told a student was present.

She said: “The water wasn’t boiling but it wasn’t far off it.

“Katie’s toes are still black, and her heel is red raw and it was bleeding quite badly a couple of days ago.

“We are not sure how it’s going to scar. This shouldn’t have happened to my little girl.”

The midwife and trainee are employed at troubled Stafford Hospital, where an inquiry into the deaths of 1200 patients thought to have died due to poor medical care is currently underway.

Colin Ovington, director of nursing at Mid Staffordshire NHS Foundation Trust, said an investigation was under way and added: “We are devastated and would like to apologise.”