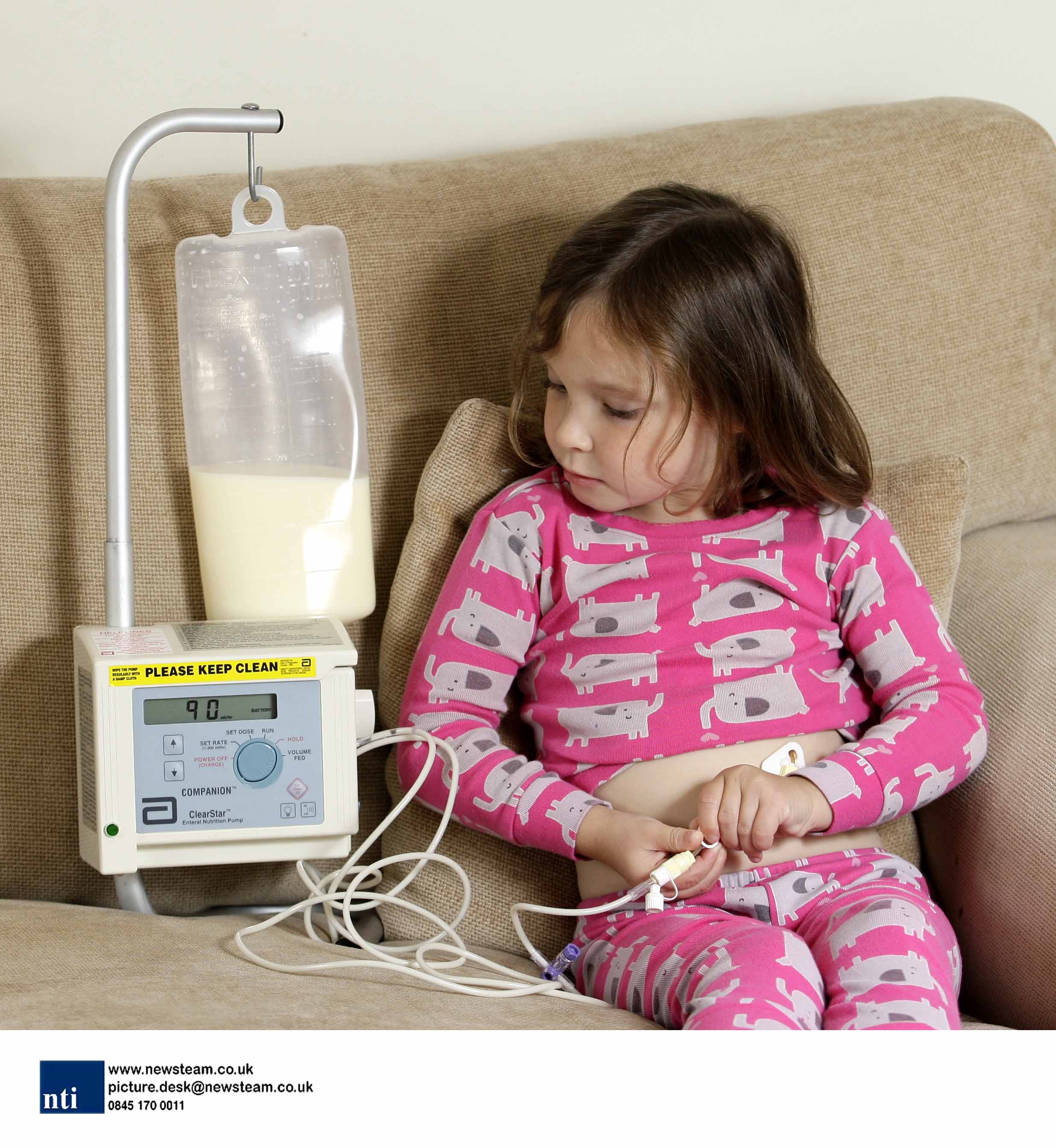 But the courageous youngster still takes a packed lunch to school every day to try and fit in with the other girls – even though she can barely eat anything herself.

Five-year-old Ella Campbell can’t eat a meal or even play with wheat-based Play-Doh due to a severe condition called eosinophilic gastrointestinal disease (EGD).
Ella has spent much of her short life in hospital while puzzled doctors struggled to diagnose the painful disorder that causes her to violently react to food, including extreme pain and vomiting.
After years of tests and being attached to machines at various hospitals, doctors at Great Ormond Street pinpointed the disease.
The youngster is now fed a hypoallergenic elemental formula through a permanent feeding tube in her stomach.
Dedicated mum Karen Campbell, 31 from Aylesbury, Buckinghamshire, described how her daughter, who can only eat small amounts at school, finds it difficult to keep up with her classmates at lunchtime.

“Ella finds lunchtime stressful,” Karen, an A&E nurse, said.
“She takes a packed lunch with her because she feels pressured to eat, but for her it is just too painful.
“She wants desperately to fit in. Often when I pick her up from school she will get in the car and collapse because she has burnt herself out at school.

“She’ll come home and immediately lie down and by the end of the week she usually does not have the energy to even attend school.”
Eosinophilic disorders occur when eosinophils, a type of white blood cell, are found in above-normal amounts in various parts of the body.

When Ella’s body encounters allergens these eosinophils multiply in abnormal amounts and instead of fighting the harmful allergy they do the opposite, causing inflammation and tissue damage instead.
Karen said: “There is very little research on Ella’s condition and we went years without a diagnosis.
“It was a very frustrating and we felt angry that we had seen so many different doctors but no one really knew anything.
“She was very small and weak and always dehydrated. It was a scary time.

ten times a day up until the age of two.

“There was speculation about whether she had cancer, they thought she might have rickets and that it was being caused by a tumour on the brain.”
Ella was diagnosed three years ago at Great Ormond Street Hospital, which is at the forefront of EGD research and treatment.

Ella is also required to take immunosuppressants – a type of chemotherapy drug – regularly, which leaves her open to infections.
“Because Ella is immunosuppressed she is more susceptible to infection, and illnesses have potential to become more serious so we have to be vigilant, and often she needs to go to the hospital to get antibiotics to fight infections,” Karen said.
“They don’t know much about it but in the future it could flare up for no reason and it can be fatal.”

Ella’s little brother Adam, two, was also born with the condition but was diagnosed at birth.
Karen added: “It’s a massive reassurance knowing what it is with Adam, because he was diagnosed when he was born. The main thing is maintaining a very strict diet.”
Although his symptoms are as severe, Adam can eat small amounts of fruit, vegetables, and plain meat because he did not develop the fear of food Ella suffers from.
“Ella realised early that it was the food that made her sick so she became frightened of food,” Karen said.

As very little is known about the disease, Karen and husband Andy, 37,  are hoping to raise awareness of the condition
“It’s been very hard for me and my husband to deal with because we feel helpless to stop the pain. I had to give up my job as an A&E nurse for a few years because Ella was always in hospital.
“But Ella has been very brave and as a family we have been through a great deal.” – I took this quote from an e-mail you sent – please let me know if that’s ok,