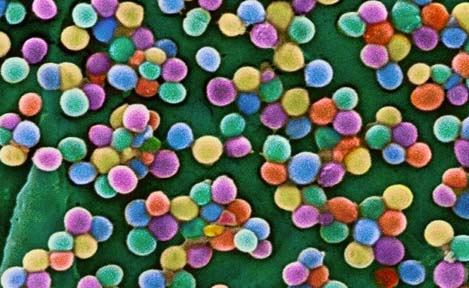 A new strain of MRSA, the ‘superbug’, has been found in British dairy cows for the first time in the UK.

This discovery has been blamed on intensive farming methods, and over use of antibiotics by environmental campaigners.

Dr Mark Holmes of Cambridge University, who led the research, said this was a “credible hypothesis”.

Organic farming lobby The Soil Association last night called for a complete ban on routine use of antibiotics in livestock because of fears they may promote drug-resistant bacteria.

We need to get farmers off this treadmill, even if that means that milk has to cost a few pennies more.

The researchers, writing in the Lancet Infectious Diseases Journal, say there is no additional health risk from eating milk and dairy products.

MRSA, or methicillin-resistant Staphylococcus aureus, is a drug-resistant form of a usually harmless bacterium which can be deadly when it infects wounds.

The research also spotted a ‘clustering’ of human and cow samples that suggested transmission between them.

Dr Mark Holmes, a veterinary scientist who led the research said: ‘Although there is circumstantial evidence that dairy cows are providing a reservoir of infection, it is still not known for certain if cows are infecting people, or people are infecting cows.’

The MRSA infection is more commonly found in hospitals, however a massive improvement in hygiene has lead to the number of fatal cases dramatically dropping. There were 1,290 in 2008 and 781 in 2009.

A spokesman from the Food Standards Agency said: ‘The risk of contracting this strain of MRSA through milk is extremely low because the vast majority of cows’ milk is pasteurised.’