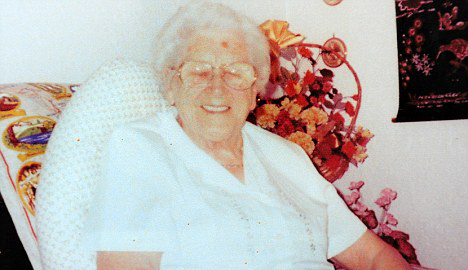 A DEMENTIA patient, riddled with arthritis and suffering from parkinsons disease was discharged from hospital wearing only her gown and slippers, it has emerged.

The family of great-grandmother-of-six Florence Smith said they were shocked at her appearance when she arrived home unexpected in an ambulance from Wolverhampton’s New Cross Hospital.

She was so cold her feet had turned blue, her family said.

Mrs Smith was only returned to her home after the ambulance had dropped off several other patients on its rounds before leaving Florence in the care of her appalled family.

Health bosses have since apologised for Mrs Smith’s treatment, admitting she suffered a “traumatic experience”. A matron from the hospital has written to the family of the 79-year-old apologising for the “very upsetting experience”.

Mrs Smith’s daughter Anita Millard, who shares a house in Willenhall, in the West Midlands, with her mother, said she was shocked at the condition in which she was discharged following a three-night stay in New Cross with a chest complaint.

“What is the point in hospitals if they can’t get basic care right?” said 57-year-old Mrs Millard.

“What has happened to my mum is a disgrace.” Mrs Smith, who was a care worker before retiring, was diagnosed with vascular dementia in 2002.

She went into New Cross on October 19 last year with a chest complaint and was given antibiotics.

Mrs Millard today/yest (WED) recalled the day her mother returned home. “She was wearing just a hospital gown which was open at the back,” she said.

“She was freezing cold. We couldn’t warm her up. Her feet were blue.”

She added: “It looked as if she hadn’t been washed. We gave her a drink and she drank it so fast.”

Mrs Millard contacted the hospital but it was not until April that she received an apology over the quality of care.

In the letter, matron Jacqui Talbot said: “I would like to offer my apologies for this very upsetting experience.” She claimed Mrs Smith was cold because the ambulance had dropped off several other patients and the doors being opened would have let the heat out.

The Royal Wolverhampton Hospitals NHS Trust was today preparing a statement on the case.

One thought on “Dementia patient discharged barefoot wearing only a gown”