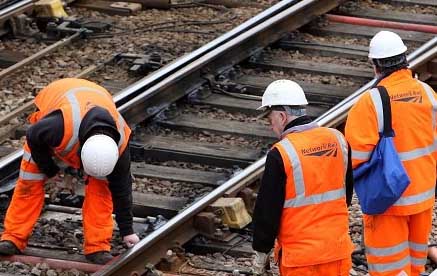 A THIEF brought a rail network to a halt and delayed more than 400 trains by stealing just 121 metres of cable from rail lines.

Wayne Griffin, 26, cost Network Rail GBP324,000-worth of damages following the theft – a bill that will be picked up by the tax payer.

Griffin, from Leamington, Warwickshire, endangered countless lives by disrupting signalling equipment and in doing so delayed a whopping 425 trains and cancelled 43 others around Rugby and Coventry.

Marianne O’Connor, of Network Rail, said the bill would be picked up by the tax payer.

Prosecutor Iain Willis said that Griffin was caught on July 29 last year when police officers, who happened to be filling their car with petrol at 5.25am, saw a vehicle on the garage forecourt suspected of being involved in thefts of copper cable.

When they searched the rear of the van they found there were a number of rolls of copper cable and tools used to cut and strip it.

Griffin was arrested and claimed he had found the cable, but in fact it had been stolen from next to the railway track at Lapworth, West Midlands. Other cable was stolen from track in Coventry.

Griffin’s actions had far reaching consequences to users of the lines as well as the cost of the stolen wires.

Recorder Richard Bond told Griffin: “Copper cabling is vital to the running of the national rail network.  It provides power to vital safety and signalling systems, and if those systems are disrupted, it is plain passengers’ lives can be endangered.

“As a result of trains being delayed and cancelled, compensation has to be paid to train operators who lose business because of what you have done by selfishly stealing cable. The money spent repairing this takes money away from improving the rail network.”

Griffin’s defence claimed he never imagined he would cause so much disruption by his actions.

Jamie Strong, defending, said: “When Mr Griffin saw the figure of what was involved, he was gobsmacked. This is not an enterprise he has engaged in previously,”