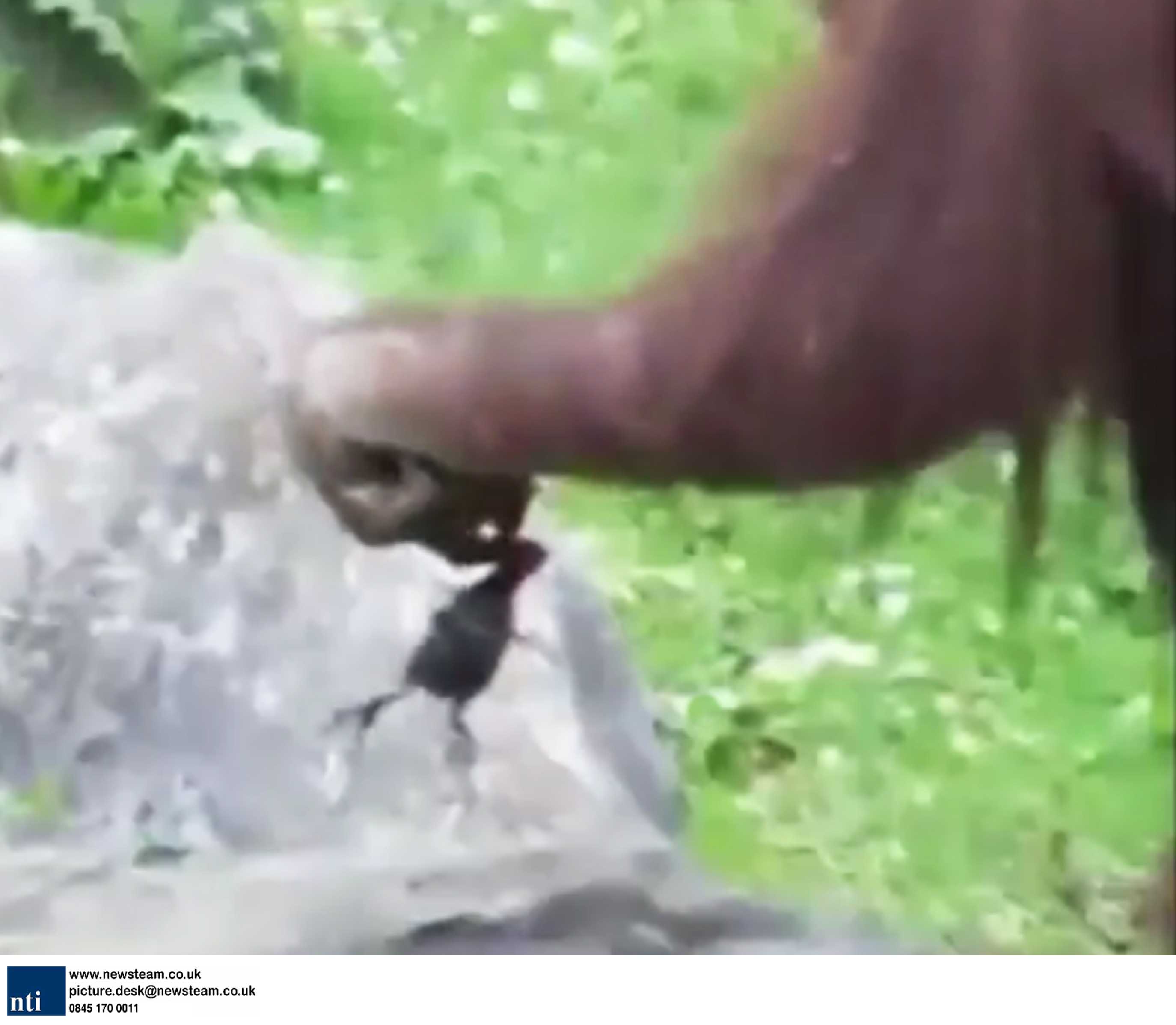 THIS is the incredible moment when a caring orangutan saves a young chick abandoned by its mother from drowning.

Captured on camera by a visitor to the unknown US zoo, the amazing footage shows the 15 stone ape mount a delicate rescue of the young bird, tenderly lifting it from the water using a leaf. It is the latest in a string of heart-warming animal stories to hit the news recently after our feature about a pig that thinks it’s a duck. 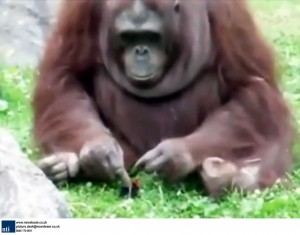 The start of the five-minute video shows the curious ape relaxing in its enclosure while the chick flounders in the water below.

Apparently unaware of the little bird’s struggle, the orangutan is shown sat on rocks beside the water disinterestedly picking his nose.

As he gets up to shuffle across the boulder-like stones back to the enclosure, the great ape suddenly notices something moving in the water.

It leans down and peers curiously into the pond, staring for a few seconds at its stranded feathered friend.

He then quickly realises that the bird is in trouble, and yanks a leaf from a nearby bush.

As it extends its arm out to the bird, it beckons to the chick in the hope that it will latch onto the leaf.

The orangutan even looks scared by the bird at first, recoiling quickly when the leaf first makes contact with its beak.

After it repositions itself, the orangutan’s bravery builds, and it gently pokes the bird’s red crest several times.

Panicked, the bird swims around in circles, but its ape rescuer never takes its gaze from it.

Thrilled onlookers cheer on the orangutan as it manages to get the bird to grip the leaf for a split second before it drops again.

The puzzled ape picks up the leaf and inspects it, wondering why the bird is nowhere to be seen.

It frantically checks around its feet and under the rocks to check where the bird has ended up, before realising that it is still in the water.

In a last ditch attempt to rescue the chick, the orangutan gently waves the leaf in front of it before it miraculously latches on to it.

As quick as a flash, the ape plucks the bird from the water to the delight of the crowd, which gasps of surprise.

During the clip, one woman can be heard exclaiming: “Oh my God look, that is unbelievable, he’s got him.”

It then carries the chick back to the main part of its enclosure, where it tenderly places it down on the grass.

The massive ape, which dwarves the little bird, then proceeds to gently stroke and play with the bird.

At one point, the shocked crowd yells out in terror as the orangutan picks up the chick and brings it perilously close to its mouth.

But it quickly puts it back down again before continuing to inspect its new friend.

Another shocked onlooker, who saw the bird fall into the water, explains what happened.

She said: “The mother duck earlier…see this rock there, she left the mother duck, she threw it in, and then she went off.

“The duck went down to the water earlier but he couldn’t get out.”

Cathy Smith, from the Orangutan Foundation, said: “They are very intelligent animals and can be very inquisitive.

“Although they mainly eat fruit, it is not unknown for orangutan’s to eat small mammals and eggs.

“But this shows how chilled out and good at problem solving these amazing creatures are.

“It’s hard to say whether he knew he would be saving the chick but you never know. I have never heard of anything like this before.”