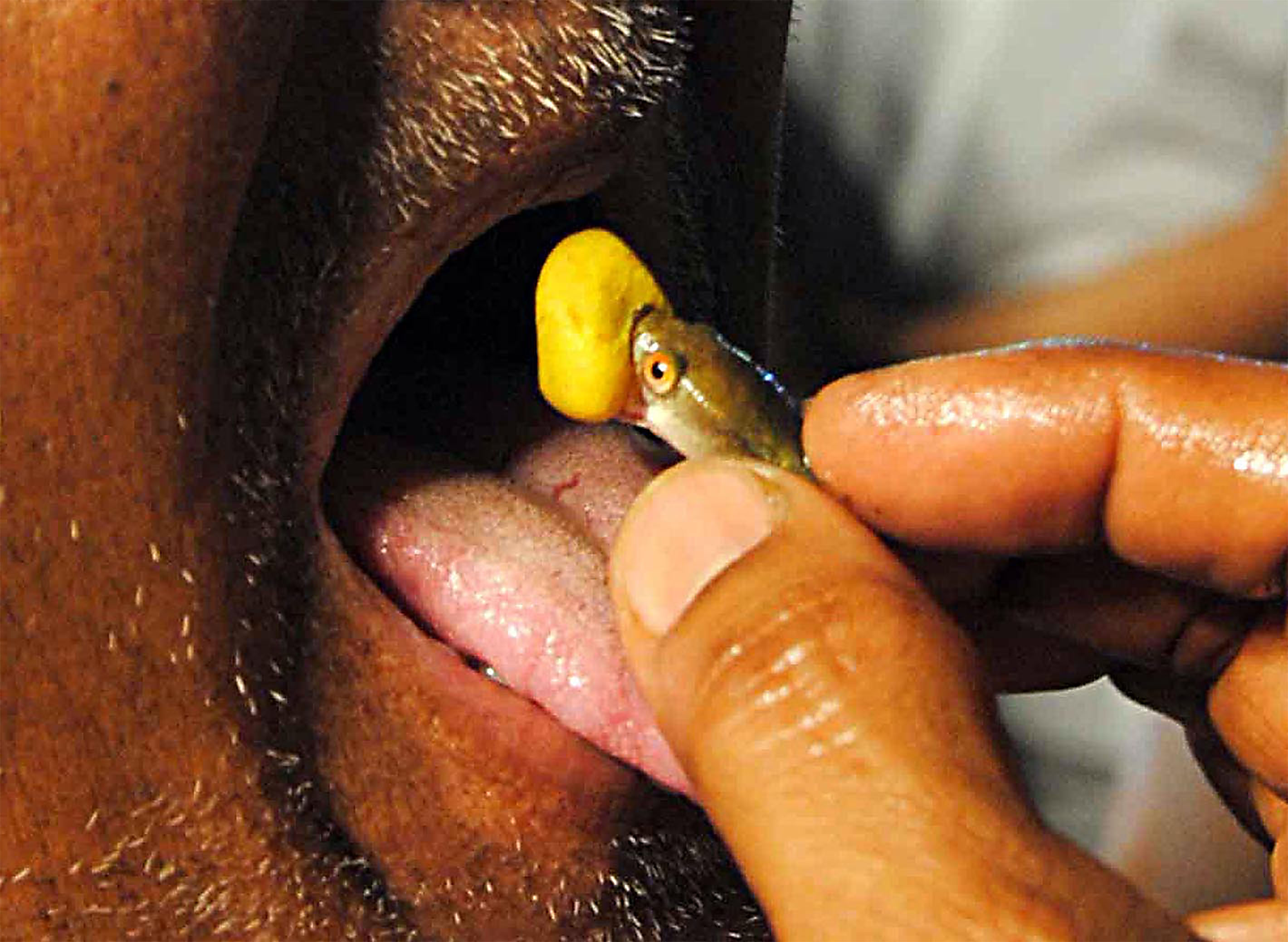 IT MAY look like a bizarre ritual, but these people are eating a centuries-old ‘fish-pill’ cure said to treat a range of respiratory problems.

Over 20,000 people descended on the city’s Exhibition Grounds to receive the ‘miracle cure’ on Wednesday, at an annual event to herald the arrival of the Monsoon season.

Eager patients lined up to swallow a live ‘murrel’, or ‘snakehead’, fish, which had a yellow herbal paste stuffed into its mouth.

Locals believe that they have to swallow the fish for three consecutive years in order to reap the benefits of the treatment.

Local family the Bathini Gouds have been distributing the fish pills free of charge for over 160 years.

They set up 32 treatment counters on Wednesday night at the city’s exhibition centre, where men, women and children had been queuing for several hours in the hope of receiving one of the ‘fish pills’.

Many of them travelled over great distances to attend the giveaway, and for some seasoned attendees it wasn’t their first time receiving the treatment.

Bhumiya Naik, who came from Latur, Maharashtra, around 170 miles/280km away, said: “This is the third time I have come here as I got some relief earlier.”

First-timer Ajmal Khan from Bidar, Karnataka, said he heard about the medicine from his friends.

He said: “I have been suffering from asthma for the last seven years. I have tried everything but nothing worked. Now I want to try this.”

Controversy hit the popularity of the so-called ‘miracle drug’ after protest groups labelled it as a fraud.

They claimed that the herbal paste, which contains heavy metals, could be doing more harm than good.

One group opposed to the treatment, children’s rights organisation Balala Hakkula Sangham, organised a consecutive event where ‘frog medicine’ was handed out to mock the fish prasadam.

But the Goud family, who were ordered to conduct tests on the paste by a local court, said it had been revealed to be safe.

The family has been distributing the ‘fish prasadam’ free of cost for the last 165 years.

It claims that the one of their ancestors was given a secret formula for the herbal medicine by a saint who made him swear that it would only be distributed for free.

Despite the fish pills being given out for free, the event is a money-spinner for the local authorities, which sees thousands head to the city.

Local fisherman also profit from the event, as thousands of the tiny murrel fish are required to administer the medicine to each patient.