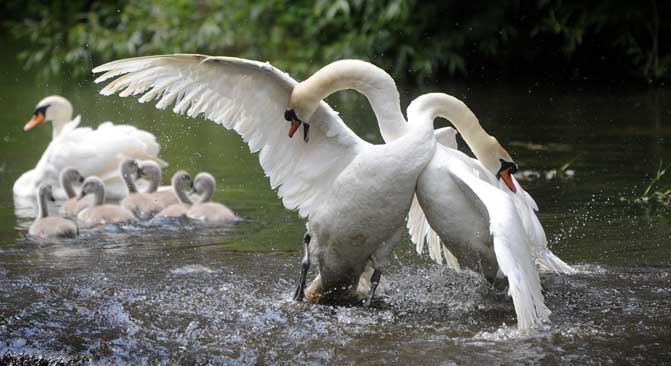 When a couple of male swans have a barney the results can be dramatic.

This bickering pair were spotted on the River Sow in Stafford, just outside The Litten Tree pub in the town centre.

Accompanied by their female partners and cygnets, they met as the families swam towards each other on the Riverside stretch of the water.

And like any males, whatever the species, they were not going to give up the chance to flex their muscles and show off in front of an audience.

A vicious fight broke out between them. One spectator said each seemed intent on drowning the other. Normally, the swans happily share the Sow not only with each other but also with ducks, herons, and water voles – but if a swan strays directly into the territory of another they will attack instantly.

Photographer Richard Harris, who snapped this wildlife domestic, said: “I was passing just as they met and saw the males start to fluff up their feathers ready for battle. It looked like they were arguing to begin with, really giving it some beak, then they got stuck in with their wings.”