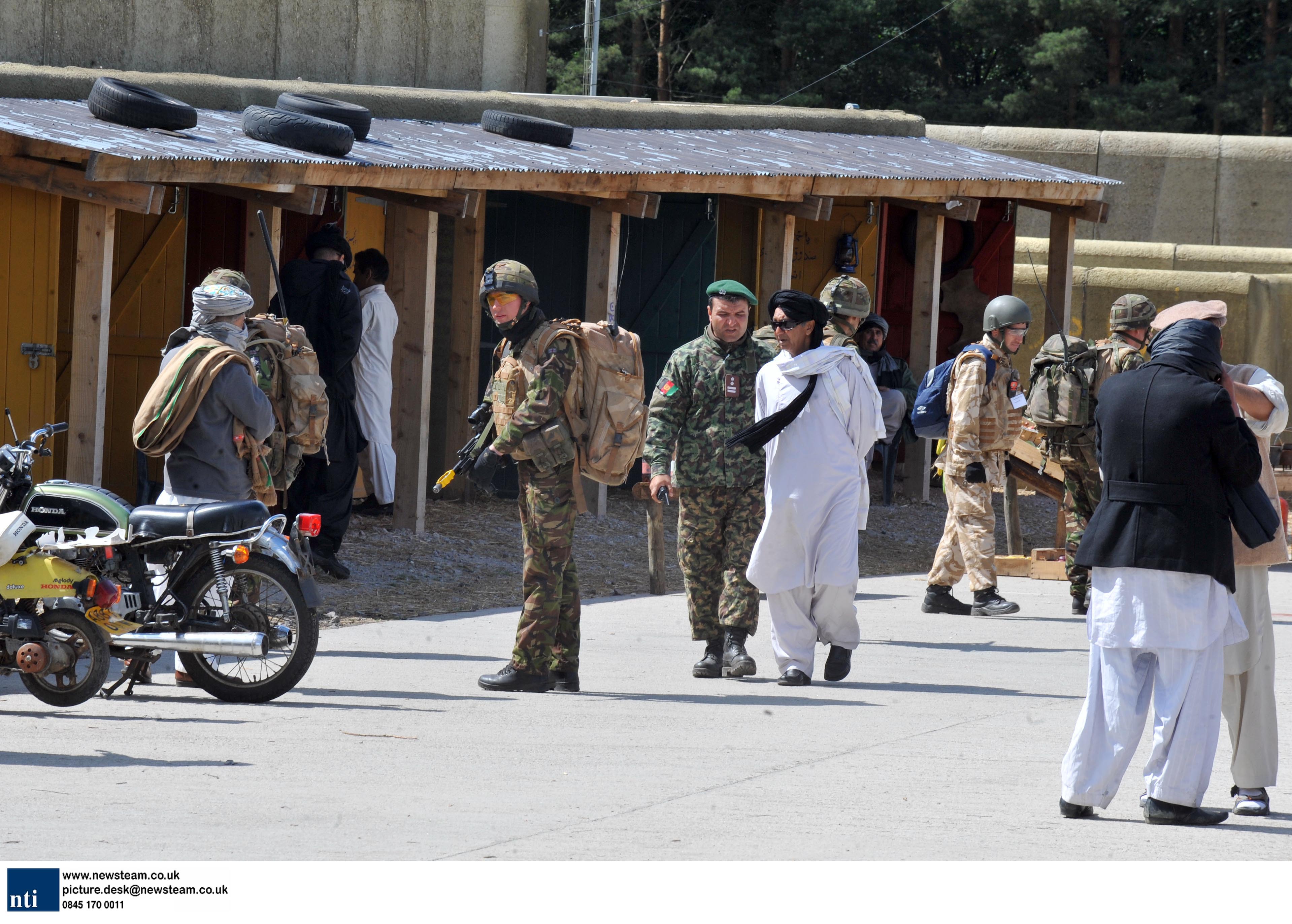 IT may look like a typical war-torn Afghan village but these scenes have actually been snapped right in the middle of the quaint Norfolk countryside.

The Queen’s Royal Hussars have been navigating the streets of a GBP14 million replica Middle East settlement before they deploy for real in August.

All the sights and sounds of a typical day for soldiers in Helmand Province are present with Chinook helicopters flying over head and Islamic calls to prayer ringing out from the local mosque.

The dusty streets are strewn with motorbikes, tyres and carts and smell of food cooked by the villagers wafts through the streets and synthetic aromas, such as rotten meat, are pumped into the air.

It is part of a week-long intensive training package designed to test the regiment in conditions that are as close to identical as possible to those in Afghanistan.

The 12.5-acre fictional village, which has been given the name Ishmaragh, is populated by Afghan volunteers dressed as insurgents in traditional Taliban robes.

The village is arranged around 25 concrete-clad compounds with between four and 12 homes in each arranged around a courtyard with a vegetable patch, as well as a washing line.

To add to the authenticity, all the homes are decorated with rugs and pots and pans, and shops are open selling fruit and rice.

But in reality, it sits in the small market town of Thetford, Norfolk, with a population of just over 20,000.

“This training is vital because it gives us real knowledge and experience of what we can expect to face when we get out there,” said Trooper Jack Sinar, from Kingswinford, West Midlands.

“It is the first one so it is important to get to practice drills in a realistic environment and I think this type of training is the best in the world.

“Before this, we did two weeks solid in the Brecon Beacons, which was really challenging,” added Jack, whose father spent 10 years as a corporal with the QRH and served in Northern Ireland and Kenya.
.
As part of the training package, the troops will encounter every possible scenario at the village – from peace and quiet to suicide bombs. Amputees from the Afghan conflict are also drafted in to act as casualties during some of the exercises.

The threat of being injured is something that is very real to members of the regiment, particularly those taking part in their first tour. “You hear about what is going on out there but you try and keep it out of your mind,” said Trooper Kyle Macready, 19, from Beaconside, Stafford.

“You just have to put your trust in your mates and know that they’re going to watch your back. We’re like brothers.”

The QRH will have 130 men from its Warthog Squadron and a similar number of infantry in C Company in Afghanistan.

More of its troops will be in the training and advisory team working with the Afghan army and police, and another element will be based in Lashkar Gah.

At the end of this week, the QRH will return to their barracks in Sennelager, Germany, where they will continue with their regular drills.

They will undergo a further week-long Afghanistan-focused training course prior to being given three-weeks leave before their tour.

The QRH is the senior United Kingdom light cavalry regiment. It was formed in 1993 from the amalgamation of The Queen’s Own Hussars and The Queen’s Royal Irish Hussars.

The regiment traces its roots back to 1685 and during the past 320 years has been awarded 172 Battle Honours and eight Victoria Crosses.

They take part in regular shuras, which are gatherings involving local villager elders, who raise issues about the activity of troops operating in the vicinity.

The Afghan training camp was designed by the Operational Training Advisory Group (OPTAG) to replicate as closely as possible the situations troops could face on operations in Afghanistan.

With the help of Afghan nationals and others who take on the role of insurgents in these training areas, OPTAG is able to replicate the sights and sounds of Afghanistan.

As part of the training exercise, helicopters manned by army and RAF pilots pass through the sky dropping off supplies and troops to each of the Forward Operating Bases dotted around the vast area.

While out on patrol, troops eat ration packs as they would if out in Afghanistan and sleep out on the ground or back at their bases in tented areas.