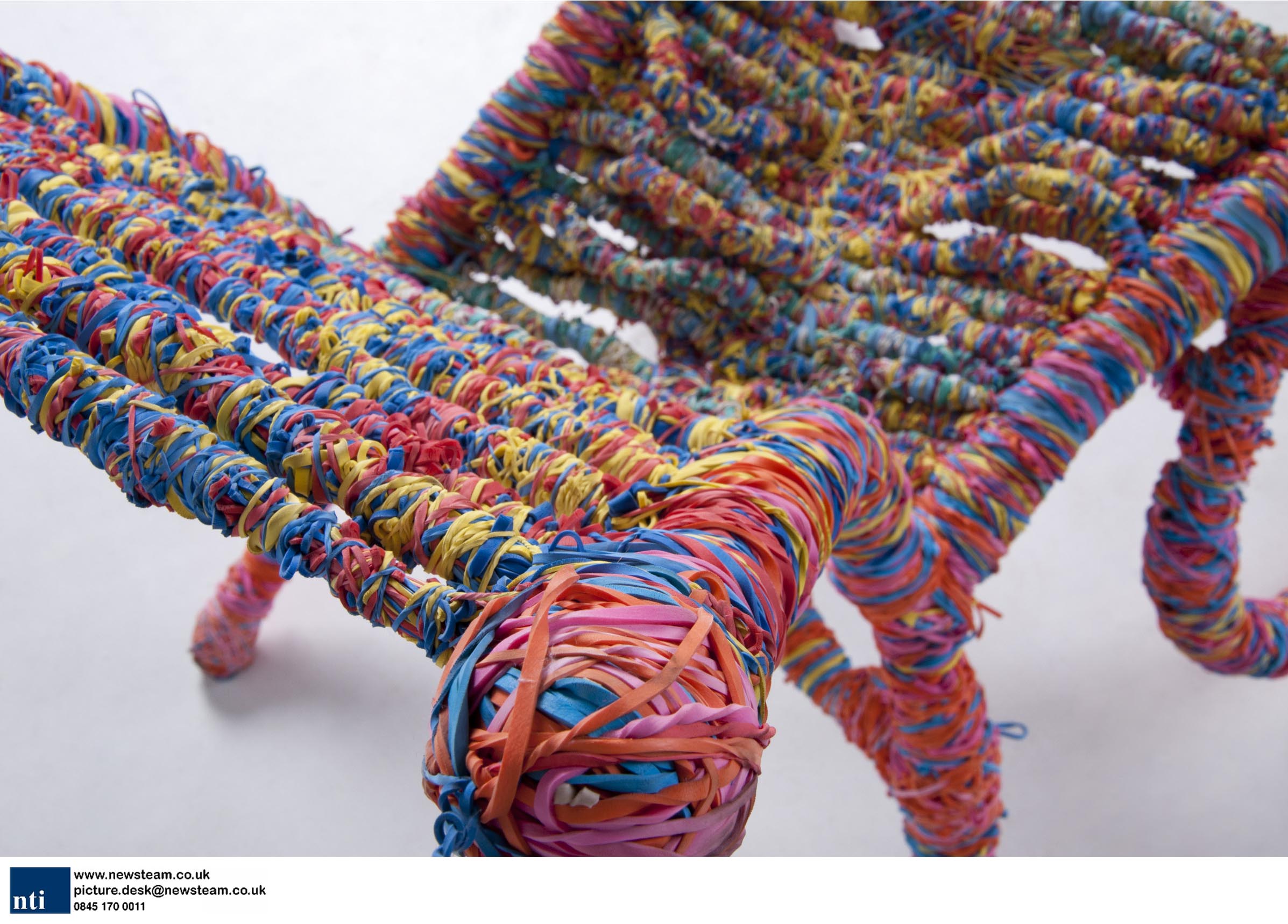 WE’VE all made bouncy balls out of rubber bands on a slow work day, but one man has taken things further and made an entire CHAIR from them.

The fully-functioning ‘Rubberband Chair’ might look like a toy, but it can support the weight of a person, and even bounces if it is knocked over.
It was created by design student Preston Moeller, 24, who embarked on the ambitious project after a friend suggested he move beyond the traditional ‘rubber band ball’ and make something new.
The chair is constructed from a staggering 65,000 bands, and took around 336 hours to design, build and perfect.
Preston needed so many rubber bands to complete the project that he travelled to stationary shops in four different towns, buying up their entire stock of rubber bands each time.
He spent over USD200/GBP125 on the bands in total, and had to make several return trips once the stores had restocked.
And its creator, a final-year student at Appalachian State University, in Boone, North Carolina, USA, insists that the chair, which has an especially springy back, is as comfortable as the furniture in any office.
Despite its ‘light and springy’ feel, the three feet/90 cm tall chair weighs a hefty 35lbs/16kg.
Preston insists that the chair is mostly rubber bands, though admits that he was forced to use 12-inch steel rods in order to give the chair some kind of shape and stability.

Preston said: “The chair is made to look and feel like it is 100 per cent rubber bands.
“It pushes the idea of what a rubber band is meant to do – while they’re usually used to hold office supplies together, I noticed that many people like to make rubber band balls.
“This inspired me to create more detailed items from rubber bands, until my classmate suggested making a chair after she noticed the strength and quality of the materials.”

Preston said that, although he wanted to make a ‘colourful’ chair, he was also very concerned about comfort.
He said: “The Rubber band Chair is fun and colourful.
“It almost looks like a fun toy that has been enlarged to a human scale where the user is sitting in a giant toy.

“But though it may look like it is all for fun it also happens to be very comfortable.”
“The back is made from rubber bands weaved within themselves to create a springy sitting area that softly holds the user.”
Though he has no immediate plans to make any more rubber band furniture, Preston has not ruled it out, and says that he hopes to work with them again in the future.
He said: “I hope to push the use of materials with my Rubberband Chair and push its abilities to the edge.
“I do not know what the future of the Rubberband Chair is right now or what the future with me is for that matter.

“But there is a good possibility that there will be more to come rubber band wise though.”