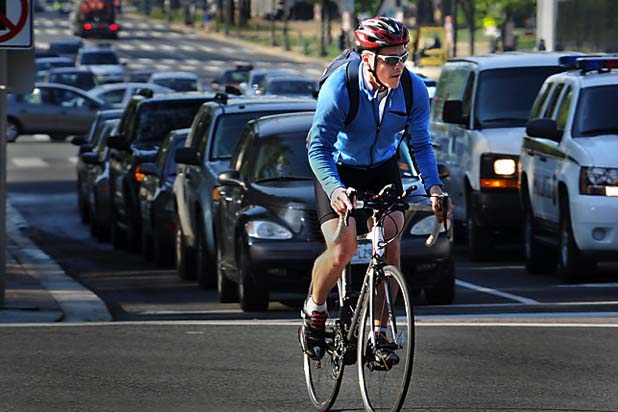 RIDING a bike to work in London could actually be less healthy than walking, according to surprising new research.

Workers who choose to cycle to the office run a higher risk of lung damage than those who walk because they inhale more soot from the polluted rush hour air.

And a survey of London cyclists found that they were more likely to have higher concentrations of dangerous carbon deposits in their lungs than pedestrians.

Cyclists are thought to take in more of the harmful black carbon because their breathing is faster and deeper than that of pedestrians.

And those who walk to work are safer because they are further away from the road than their counterparts on two wheels.

Researchers at the London School of Medicine surveyed a sample of non-smoking urban commuters aged between 18 and 40.

The study compared levels of black carbon deposits that had accumulated in their lungs, and found that cyclists had 2.3 times more than pedestrians.

Those behind the study have called for more ‘low-pollution cycling routes’ in the capital as a result of their findings.

Some cyclists have said that they may change their commuting habits in light of the new research.

Keen bike-rider Johnny Parker, 36, a trader who bikes into work in the City everyday from Bow, East London.

He said: “I’m very surprised at these findings – you kind of assume that you’re doing yourself good by biking in to work every day.

“I don’t think that I’ll stop cycling in, but I might take a slightly longer route and ride through some parks rather than sticking to the road all the time from now on.”

Other commuters were less sympathetic to the plight of the cyclists.

Advertising executive  Gavin Stringer, 54, from Parsons Green, who drives to his office most mornings, said: “Hopefully this might get cyclists off the road, or cause the town planners to build cycle routes that aren’t directly on the road.

“Almost every morning at least one cyclist gets in my way, hopefully this will make them a bit less smug.”

The research, which was presented at the European Respiratory Society’s Annual Congress in Amsterdam this week, is part of an ongoing study into the health benefits of different kinds of transportation.