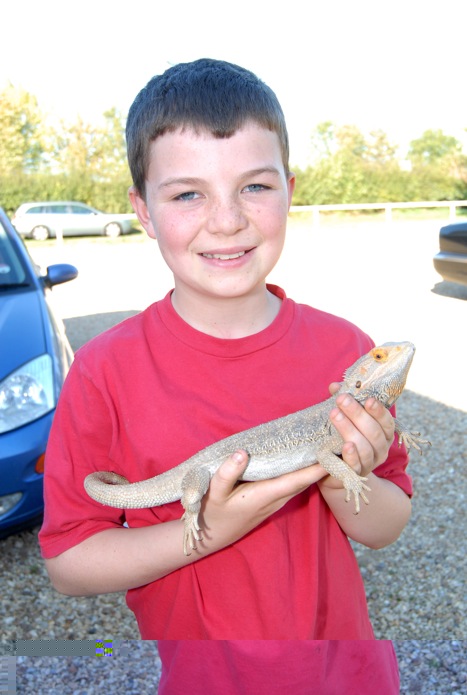 A BEARDED dragon which went missing from home has turned up two miles away – in a pub called The George and Dragon.

Giz vanished from the garden of his home in Harringworth in Rutland, Leicestershire, a month ago and owners Tracy Sharp and Phil Moody, along with their sons Tyler and Zac, had given up hope on ever finding him.

But last week he was found by the landlords of The George and Dragon pub in nearby Seaton.

Tracy said: “I had thought last week that we would never see him again and had told the boys that it was unlikely he would survive the winter on his own.

“Then last night my friend called and said she had seen something on this website and I called the vets this morning and went a picked him up.

“I’m beginning to wish I had called him George.”

Tracy, who has had Giz as a pet for five years, has built a pen for him in their garden and puts him in there in the summer when the weather is nice, but he found a way of escaping.

She added: “The villagers are quite used to finding him in their gardens now. They just bring him back. This is the furthest he has ever gone before.

“I’m never worried about him because I know he will be fine. It was just the cold weather that was concerning me this time.”

Giz finally resurfaced at the George and Dragon last Thursday, much to the surprise of the landlords Tom and Ginny Martin, and amusement of the customers.

In order to get there he will have gone under the Harringworth viaduct and up through the Welland Valley.

Tom said: “I went outside to get a delivery from the wine merchant and he was just sitting on the step. He then walked into the pub. He was as cool as a cucumber.

“Ginny and I got him into a box and called the vets. The customers could not believe it. They thought it was a joke or a toy lizard.”

Giz was taken to Uppingham Veterinary Centre in Uppingham, who immediately contacted the local paper who put the story on their website.

Tracy added: “The boys and I were chuffed to bits when we heard he had been found.
“He’s a little so and so. I’m not going to stop putting him outside though. He loves sitting in the sun.”

Tracy’s next challenge will be to get Giz to adapt back to life in captivity. She said: “He has obviously eaten very well and is used to all of the organic food he has been eating in the fields because he’s refusing to eat the food from the pet shop.”