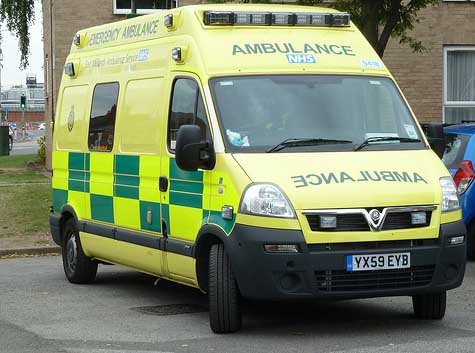 AN AMBULANCE service has been fined £5MILLION and branded the country’s worst after it was named as the only one in England to fail to meet basic targets.

East Midlands Ambulance Service was fined for failing to meet the 75 per cent annual target last year for attending the most serious category A calls – where life is in immediate danger – within eight minutes.

New figures show it was also the only trust in England to fail to meet the target during August this year.

The latest figures, released by the Department of Health, show the proportion of category A calls resulting in an emergency response arriving in eight minutes was 77.4 per cent nationally compared with 74.4 per cent in the East Midlands.

The service is required to attend 75 per cent of its category A emergency calls within eight minutes during each financial year.

NHS Derbyshire County, which oversees the performance of the service, fined it GBP5m, which represents over a pound for every person the service covers, for not achieving the national response requirements – it plans to reinvest the money in the service to improve performance.

The service was also one of only two trusts in August to fail to achieve the 95 per cent standard for category A calls where a patient should receive an ambulance capable of transporting them within 19 minutes of the request being made.

A service spokesman said it was “disappointing” to not reach the eight-minute response time in August but it was committed to reaching the annual target and other quality indicators.

He said: “We recognise, sadly, in the month that is shown in August we didn’t hit the annual target of 75 per cent.

“There are times when speed is important, but what is also important is the quality of care and the clinical impact of what we do when we treat people.

“We train people to a high standard to be paramedics. Paramedics are an increasingly large proportion of our workforce as people have more skills so that they can treat people at home without the need for going to hospital.”

A number of measures have been introduced, including revising staff rotas to cover times when there is the greatest demand and introducing a new computer system for control rooms to direct the nearest available ambulances to incidents, the spokesman added.

Martin Whittle, deputy chief executive and director of assurance for NHS Derbyshire County, said: “It is important that we recognise that EMAS may not achieve the standards required but we are investing into the organisation to support all the measures being taken to address the under-performance. We can assure patients across the East Midlands that we will be working closely with EMAS to ensure that every penny that is reinvested will be used to drive up performance and improve services.”

Reaction to the news was mixed among those who had used the service.

Matthew Webb, 18, of Corby, Northamptonshire, said: “It’s very worrying. I needed to call one for my friend, who had a fit, quite a bad one. We phoned up and they put us through
to London, then Northampton, then Corby. It took about 40 minutes to get there.”

James Bains, 25, from Stamford, said he thought the failure was not on. “I cannot believe such a simple target can’t be hit. they only have to get three-quarters of their responses on time.”

Alan Thomas, 71, of Lincoln Way, said; “I’ve been having ambulances on and off for 10 years. As soon as my wife has called they have come straight away as I’ve had three aneurisms. I’ve got nothing to complain about. The service is very good, even during the snow last year.

“A lot of people say they take a long time but it depends where the ambulance has to come from.”