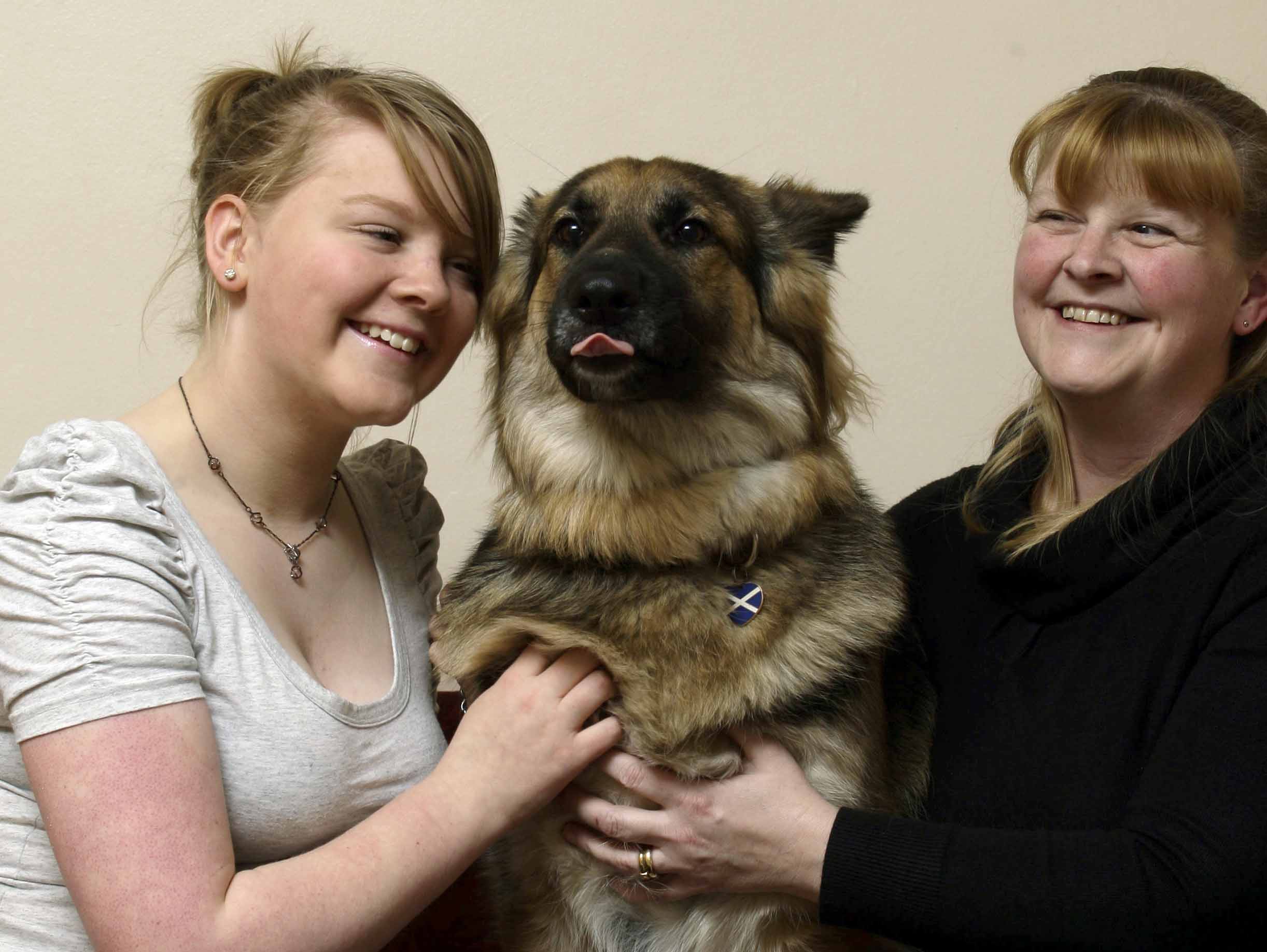 A MOTHER has told of the terrifying moment their ‘friendly’ puppy ‘flipped for no reason’ and savagely mauled her thirteen-year-old daughter, ripping off part of her face.

Iona Manson, 13, was left requiring 50 stitches to her horrific injuries after the family pet tore off a chunk of her nose.

Iona, from Birmingham, was in the kitchen with her mum Mhairi about to eat her evening meal when one of their two 13-month-old German Shepherds launched the vicious attack.

As her mother watched on, the powerful dog, called Fidden, brutally ripped the bridge of her nose apart – leaving her pouring with blood and sure the dog had blinded her.

Remarkably plastic surgeons managed to piece together her face after two hours of surgery and today the sprightly teenager has barely a scratch to remind of her of the terrifying attack.

But mum Mhairi, 39, said she was still struggling to sleep after witnessing the ferocious incident.

“It was horrific,” said the former ambulance worker. “Iona just bent down to give him his plate of food and he just went for her.

“He just flipped, even afterwards when we put him in a cage he growled and barked angrily every time one of us went near him, something had changed in his mind.

“When he got off Iona there was so much blood in Iona’s eyes that she couldn’t see a thing and was sure the dog had got her eyes.”

Her Dad, Scott Manson, an army trainee nurse who previously served 18.5 years as a tank commander, was in the living room and heard the dog growl and then Iona scream during the attack on June 13 this year.

“I rushed into the kitchen and saw Iona holding her face and screaming as blood poured out,” said Scott.

“I grabbed the first thing I could find to dress the wounds and stem the bleeding which, as it happens, was socks from the washing basket.

“My wife, called 999 and shut the dog outside whilst I just went into triage mode to treat my daughter.”

According to Mhairi when she tried to contact police she was left on hold and then they refused to destroy the dog.

“They told us we had to take Fidden to the vets ourselves to get him put down,” she added.

“The ambulance arrived in no time at all but the police didn’t seem interested.

“The attack was so vicious even traumatised our other dog, his brother, Bracken. She cowered in the corner and wouldn’t come out for days.

“We’ve had them since they were nine days old, you just do not expect that to happen from a friendly dog.”

Iona, who spent three days in hospital where she had over 50 stitches and two-and-a-half hours of surgery to her face.

Talking about the attack, Iona said: “I don’t remember much which is probably a good thing.

“I remember Dad telling me to sit up so that he could see my face and then the next thing I can recall is being in the back of the ambulance and looking out of the window. I don’t even remember having a cannula in the back of my hand, and I hate needles.

“She’s an extraordinary young girl,” added proud mum Mhairi. “When she came back from the hospital the first thing she did was go up to the window to go and see our other dog.

“She’s not so sure about other people’s dogs but she’s not scared, I think the whole thing phased me more than her.

“The plastic surgeon has done a brilliant job, you can barely see a scar on here which is amazing considering massive bite she had on her face.”

Greg Markham, a First Contact Practitioner from West Midlands Ambulance Service, said: “We were told by control that it was an animal bite and, to me, it was one of those jobs that could’ve been nothing.

“When we walked into the house there was too much calm and it was very quiet. As we made our way into the kitchen we found a very calm but shocked Iona with bandages on her face, a lot of blood everywhere.

“Scott and Mhairi made our job very easy to do as they themselves were very calm and had done an excellent job already in treating Iona.”