MANY people will open their calendars this week to a picture of a bikini-clad babe or a shirtless fireman, but some lucky punters will find a picture of a ROUNDABOUT. 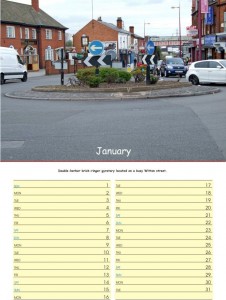 The creation of eccentric businessman Kevin Beresford, ‘Roundabouts of Birmingham 2012’ is a wacky calendar that will drive its owners around the bend – particularly if they received it as a Christmas gift.

Kevin, 59, from Redditch, Worcestershire, has compiled twelve images of roundabouts in the notoriously concrete-heavy second city, taking in what he considers to be its most iconic traffic islands.

The GBP8.50 planner includes a roundabout in the city’s Jewellery Quarter which features a large clock as a centrepiece, and one in the Quinton area of the city that Kevin describes as a “delightful roundabout incorporating two radiant flower beds, a towering tree as a centre piece, and an enchanting pedestrian pathway.”

Photos of the roundabouts – most of which are backdropped by grey skies – range from traffic cone-laden mini roundabouts to quiet suburban settings.

And the December roundabout has a mini covered in flowers as its centrepiece – close to the site of the former Longbridge plant which produced them.

‘Roundabouts of Birmingham’ is the latest in a long line of wacky year planners created by Kevin – lovingly dubbed by him as the ‘Cr*p Calendar Series’ –  as part of his quest to create the most mundane calendar possible.

Kevin, who runs his own printing business, started creating bizarre calendars in 2003 with one based on roundabouts in Redditch, where he lives.

After it became an unlikely hit, he went on to create more calendars, including one based on prisons and one dedicated to Birmingham’s number 11 bus route.

But despite the odd diversion – including a controversial Roadkill calendar – Kevin has always come back to producing calendars based on roundabouts.

He has sold over 100,000 wacky wallcharts so far, and says that they helped to save his once-ailing printing business.

This year, he also produced a calendar dedicated to the UK’s former insane asylums.

Kevin said that the tongue-in-cheek calendar celebrates Birmingham and its place as a centre of industry.

He said: “Britain’s second city can actually boast more canals than Venice, a work-place of a thousand trades, the longest municipal bus route in Europe, a golden Jewellery Quarter, and one of the world’s finest symphony orchestras.

“In addition, it is also home to a huge amount of highly impressive, high quality, highly efficient, high-octane, one-way-gyratories.”

Now that he has a worldwide customer base, with punters in the USA snapping up his calendars, Kevin plans to produce further calendars based on roundabouts.