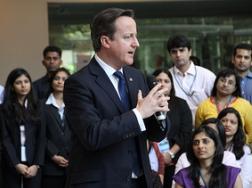 David Cameron has led the largest ever prime ministerial trade delegation from the UK to India today (February 18th).

As part of an effort to help promote British business overseas, more than 100 companies are participating in the three-day visit, alongside a number of ministers.

The prime minister vowed to do everything in his power to help Britain succeed in the global marketplace and suggested India needs a partner that can support its ambitions in multiple sectors.

“Britain can do all these things and more. So, we have to get out there, make the case for Britain and open doors for British business,” he said.

The delegation will visit both Delhi and Mumbai and Cameron is set to meet with Indian president Pranab Mukherjee and prime minister Manmohan Singh.

Among those in attendance are representatives of brands including Debenhams, Brylcreem and TRESemme`, whose products are set to go on sale in India in the near future.

A partnership between the Royal Mint and the MMTC-PAMP India was also announced, in addition to a raft of other trade and investment deals, which are expected to create 500 new jobs in Britain.

Trade minister Lord Green hailed India as having the potential to become one of the largest markets in the world.

“Government is clear that we must build deeper ties with India. This means supporting and encouraging a range of companies, both large and small, to do business there in the future,” he said.