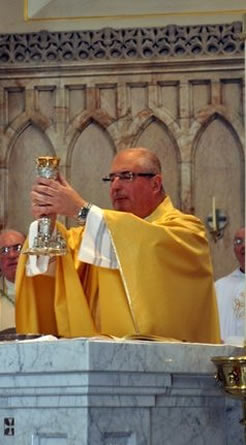 Pope Benedict XVI has named archbishop of Glasgow Philip Tartaglia as the successor to cardinal Keith O’Brien in the position of archbishop of St Andrews and Edinburgh.

The 62-year-old will take over as apostolic administrator for the archdiocese until a new archbishop is appointed.

Archbishop Tartaglia claimed he takes over the position in a “painful and distressing” time for the region.

“With the grace of God, I will do my very best to oversee and govern the Archdiocese until the appointment of a new Archbishop. I ask for your prayers,” he said.

Cardinal O’Brien announced he would be stepping down from his position on Monday (February 25th), amid claims that he engaged in inappropriate behaviour with young priests.

He had been scheduled to travel to the Vatican to attend the conclave responsible for choosing the next pope. His absence from the voting means Britain will not be represented in the forthcoming papal election.

O’Brien had tendered his resignation to Pope Benedict some months previously, but was meant to formally retire at a later date before accusations of inappropriate conduct arose.

Three priests and one former clergyman have accused the former cardinal of inappropriate behaviour in a number of incidents that took place over 30 years.