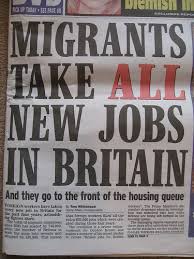 Great Britain does not want to put barriers for the EU immigrants that want to work in the Albion, despite the controversies connected with this subject. This is the official statement of the British Prime Minister, David Cameron, according to The Telegraph. The declaration was made to fight the rumours spread by some tabloids, which claim that 130 000 new immigrants will come to UK every year.

David Cameron also said that he rejects the requests formed by the Independence Party (UKIP), which wants Great Britain out of the European Union, and abandoning the treaties for free circulation of people in the United States.

The publication The Telegraph notes that almost one million people came to the United Kingdom during the last decade, 150 000 coming only last year.

During the last few months, the British officials applied a series of stricter rules to limit the access of foreigners to social care. Even so, free circulation of people in the European Union will not be affected, claims Cameroon.

We need to make sure that the freedom to work is based on the principle – you come in a country and you start working, then you start asking for social care, where applied. Currently, many English citizens go to work to other EU countries. The principle works the other way around, meaning that many EU citizens come to UK also.