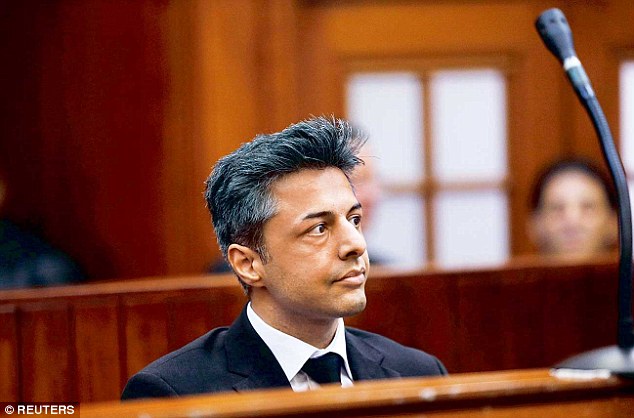 Shrien Dewani, a British businessman, agreed to pay a hitman £1,300 for the murder of his wife Anni during their honeymoon in South Africa, a court has heard.

Now into the second day of the trail in Cape Town, one of those involved in the murder, Mziwamadoda Qwabe said that he was asked to be involved in murder, which they planned to make look like a hijacking in return for the money.

Mr Dewani, has denied any involvement in the plot to murder Anni which was carried out during their honeymoon back in 2010 and is facing five charges which include murder and lying about the circumstances that led to his wife’s death.

Shiren and Anni were held at gunpoint after being stopped whilst in a taxi driving through Gugulethu, a township situated just outside of Cape Town.

Qwabe was sentenced to 25 years in prison back in 2012 after pleading guilty to his role in the murder and appeared in the courtroom on Wednesday to testify against Mr Dewani.

Prosecutors are arguing that Mr Dewani conspired not only with Qwabe, but with both Zola Tongo and Xolile Mngeni who also played vital roles in the murder.

Mgeni was convicted of Anni’s murder and was sentenced to life in prision. Tongo, who was hired by Dewani’s assistant as the driver, is believed to be the member of the trio to hear first of the supposed ‘job’, which lead to later interaction with both Qwabe and Mngeni, and he received an 18 year prison sentence for his involvement.

Qwabe stated in court that Tongo called him to tell him that someone needed to be murdered and a day later the pair met to discuss how they were going to conduct their plan, and agreed on a price of 15,000 rand, which at the time was the equivalent of £1,300.

Qwabe went on to claim that Tongo told him it was a husband who wanted his wife to be murdered in a fake hijacking before telling him the route the taxi was to take, with the court also hearing that the money was to be left in a ‘cubby hole’ in the taxi.

Qwabe’s final admission was that he was the driver and not the gunman, with that role allegedly being occupied by Xolile Mngeni, and told Mr Dewani to exit the car before driving on forward, which is when Mngeni was believed to of shot the victim.