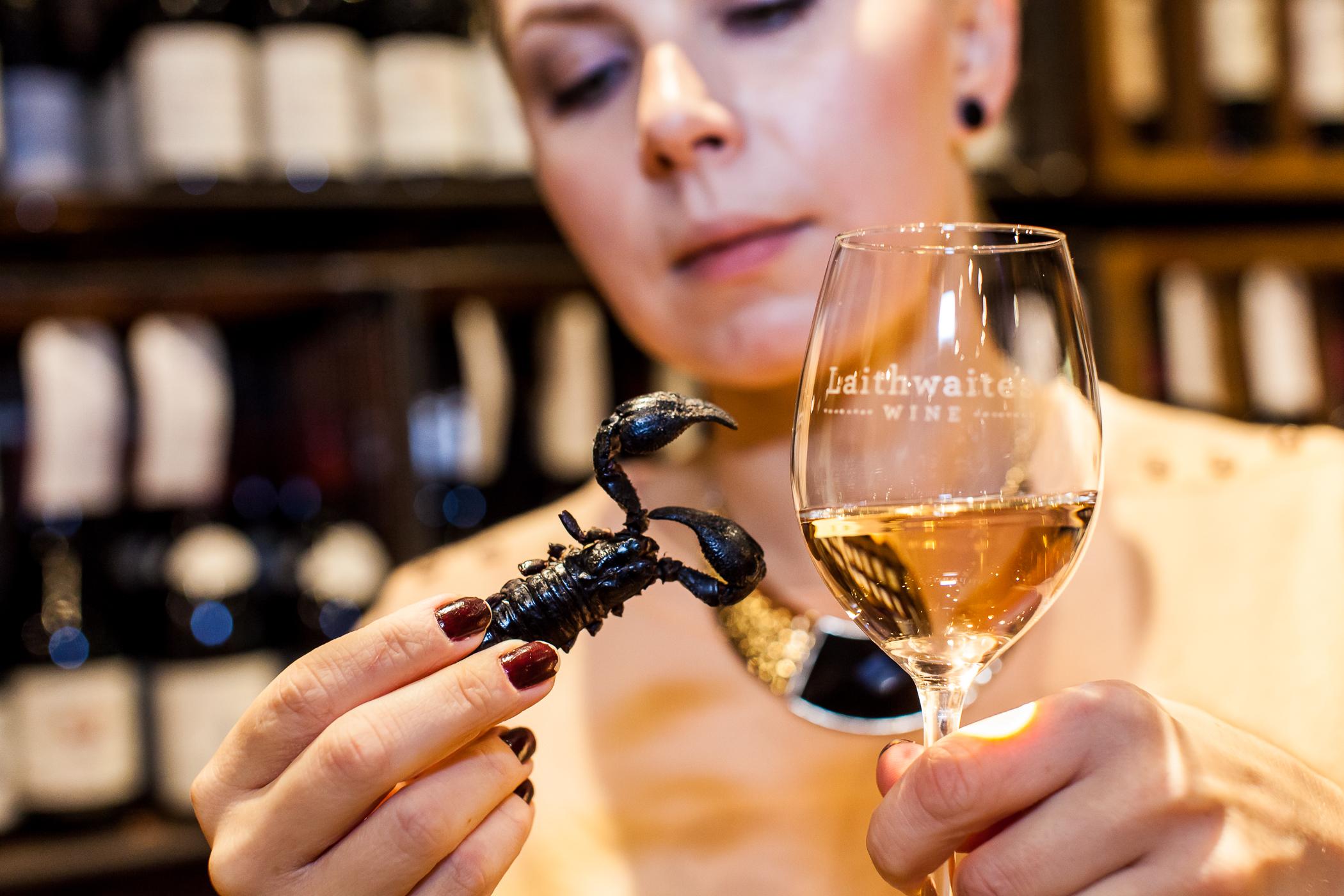 Choosing a great bottle of wine to have with food shouldn’t be a bugbear, particularly if that food happens to be a bug. Thankfully, help is on hand, as the buying team at Laithwaite’s Wine has undergone a bush tucker trial of their own to prepare the first ever tasting notes matching wine with insects.

So, while most of us enjoy a glass of Malbec with steak, those brave enough can now try something a little different. Whether that’s a crisp Viognier to compliment the nutty flavours of a meal worm, or a sparkling rosé to add some much-needed sweetness to a plate of barbecued locusts, no rock has been left unturned.

High in protein and inexpensive, edible insects are being touted as the new superfood with popularity soaring around the globe. Noma, the Copenhagen restaurant ranked number one in the world, is incorporating them into their menus, they can be bought in exclusive London department stores and a recent UN report described edible insects as a ‘sustainable food source for the future’. Indeed, two billion people worldwide already supplement their diet with them.

That’s why Laithwaite’s Wine has taken their tastebuds to the extreme to explore new territories in wine pairing, discovering the perfect wines to go with a whole jungle full of insects.

Each bug was rigorously tasted and paired with one of Laithwaite’s 1,000 wines and all the bugs featured were sourced from ethical suppliers. The company is now considering including the tasting notes in selected cases of wines, as demand for edible insects in the UK grows.

Beth Willard, Wine Buyer at Laithwaite’s says: “On average each buyer will try over 10,000 bottles of wine a year across the world, but we never envisaged making our final selection with insects in mind. There’s clearly a growing appetite for them.”

“When you consider that many of the words used to describe the aroma of wine – earthy, grassy, floral – can also be used to describe the bugs’ habitats, it’s no surprise that wine can really complement the distinctive tastes of insects. The word ‘full bodied’ will never be the same!”

Mealworms – Commonly enjoyed as enjoyed as a taco topping or standalone snack. Match their nutty taste and light, crunchy texture with a crisp Clare Valley Viognier wine that has just the right combination of fruit and richness. (Prospector’s Riesling Viognier 2013, Clare Valley, £9.99).

Zebra Tarantula – The body and legs have slightly different flavours, although both taste a bit similar to fish. Tarantulas are normally eaten deep fried, so think similar to fish and chips. A lively full bodied Chardonnay will stand up to the complex fishy flavours of theTarantula. (Collovray & Terrier Chardonnay 2013, £8.99 a bottle).

Sago Worms – These worms have a distinct taste a bit similar to bacon so you need a big meaty red with loads of punch to match that savoury flavour. McLaren Vale Shiraz is fresh with loads of red fruit and spice (RedHeads Tomahawk Shiraz 2013, McLaren Vale, £10.99).

Giant Waterbugs – The meat inside the water bug’s body tastes a bit similar to a sweet scallop, while the head has hints of anise, so you’ll need to find a wine that can match well with seafood and stronger flavours. A dry sherry, and a Fino at that, is the only choice here. The crisp citrus and nutty flavours will complement the complex flavours of the water bugs. (Bodegas Gutierrez Colosia Fino NV, £7.49 a bottle)

Queen Weaver Ants – A crunchy ingredient in stir fries. Their slightly sour and crunchy taste, a bit like a lemon, means they would go really well with an aromatic white with pretty fruit and floral notes. A Gewürztraminer provides the perfect balance to Asian style meals, especially crunchy textures. (Hunter’s Gewürztraminer 2013, £14.99 a bottle)

Asian Forest Scorpion – Scorpions have a strong, bitter flavor and are normally eaten with sweet chili sauce. Paris Street Rose is full of rich sweet fruit made from full bodied Transylvanian Pinot Noir, so it will have enough body to cut through the combination of sweet and sour; an exotic wine for a more exotic insect. (Paris Street Rose 2013, Dealu Mare, Romania, £7.49)

Chocolate dipped locusts – These locusts are essentially a savory dish as they taste a bit like sunflower seeds, but also have the sweetness from the chocolate. We’ve gone for a rich robust wine with loads of sweet fruit to stand up to these flavours, made in a style which has endured for centuries. Locusts have been eaten for centuries so there is a synergy with the insect’s heritage too. (Cabalié 2013, Côtes Catalanes IGP, £8.99)

Crickets – The flavours are much harder to distinguish in crickets and so they are often prepared with garlic and salt. Nevertheless the nutty flavor that comes through means a perfect fit is a rich full-bodied white wine like Albariño. This wine comes from the seaside of Galicia in North West Spain so it is laden with the salty sea air: perfect to cut through these little critters. (Sendero des Santos Albariño 2013, DO Rías Baixas, £8.99)

Garlic Chapulines – Have an earthy and grassy flavour and a very crunchy texture, therefore we recommend a creamy dry Champagne that will match well with the earthy flavours (similar to matching with mushrooms) and crunch. (Comtesse de Bellefleur Grande Réserve Champagne NV, £14.99 a bottle)