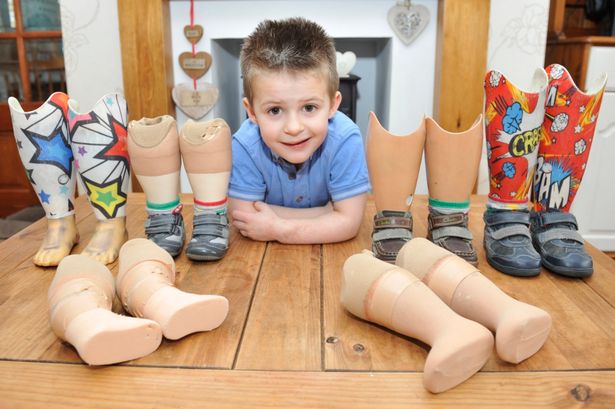 A brave four-year-old boy who lost his fingers and legs to meningitis is determined to raise as much money as he can for a new extension to help his independence.

Little Louie Jenkins contracted the disease when he was just five months old and has needed nine different sets of prosthetic legs as he has grown.

Louie and his mum Julie are now hoping to raise £10,000 towards a new ground floor bedroom and wetroom to help make his life a little easier.

Julie, 33, said: “We’ve always known an upstairs bedroom and bathroom wouldn’t be enough for Louie as he grew up.

“He’s already had nine different prosthetic legs because as he grows and his legs change we’ve needed to adapt his legs.

“But as he continues to develop, his struggles are becoming more and more obvious. He really struggles to get up and down the stairs.

“It can take him five minutes to get up the stairs and when he needs to get upstairs in a rush or when he is tired it is really difficult.

“This would really aid his independence and really help him to progress in his life as he grows up.”

Julie applied for help to extend the family home in Nelson, Lancs., as part of a disability grant from the council.

She added: “We applied two years ago for financial help with the extension and, with a few modifications to the originals, it has added costs and left us with a shortfall.

“I’m hoping the work can start in June.”

To help kick start the funds, the family has organised a sponsored walk around their local park – an event Louie himself will be taking part in.

Describing Louie as a “stubborn and determined little boy”, Julie is thrilled that he is getting involved with raising the money the family needs.

She said: “It’s important for Louie to know about fundraising and to get involved.

“It’s also really nice for people who are coming out to help us to be able to see that Louie is doing it as well.

“He will be there with his walking frame doing his bit to help get the money we need for his extension.”

“I think we have at least 60 people signed up for the walk so far and a load of raffle prizes.

“Those taking part will get a bottle of water, a cereal bar and a medal for finishing it.”

Julie added: “It’s also about helping to raise awareness of meningitis and that’s what we really try to do with our fundraising events as well – get people talking about what it is.”

Louie, who lives with his older sister Francesca, nine, and two step sisters, Holly, nine, and Beatrice, six, is already excited about what colour his new room might be.

“He thinks he might want a pink bedroom but I think we’ll have to see how he feels when it’s all finished.”

Louie is currently on his ninth pair of prosthetics and Julie admits he is still a little wobbly on his feet but refuses to slow down.

She added: “Louie has learned to do everything a normal little boy does such as crawl and sit up but without legs and it has just taken him longer.

“He never gives in and he is really dedicated to doing things himself. He’s really outgoing and he’s really good at learning new things.

“This extension will really help him to move forward and do more things on his own.”

To donate to Louie’s appeal, go to https://www.gofundme.com/p7o1yk.