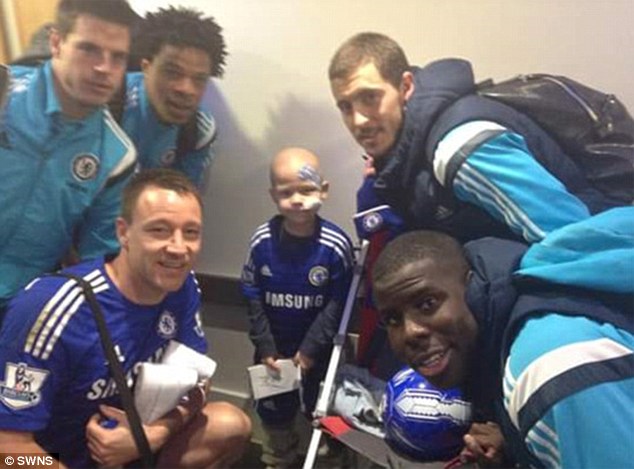 Chelsea star John Terry has offered to pay for the funeral of his biggest fan who has tragically lost his battle with leukaemia.

Eight-year-old Tommi Miller died after an unsuccessful attempt to carry out a bone marrow transplant.

The youngster, from Cambridge, Cambs., met Terry in June last year as well as a number of other players at Stamford Bridge, but the centre-back was always his favourite.

The 35-year-old former England captain said: “Having had the pleasure of meeting Tommi at a Chelsea game I was totally devastated to hear of him passing away.

“I’m sure his family and friends will give him the send off he deserves.”

The centre back said he would pay the £1,600 total after being contacted by friends of the family on social media.

Tommi’s funeral will take place on Thursday (14/4) and all attending will be wearing either Chelsea shirts of the Cambridge United strip to show his passion for both clubs.

His mum Ruth, 41, said: “I’m overwhelmed really, because Tommi was such a great fan of John Terry in particular. He was one of his favourite players.

“We don’t want a traditional sort of funeral. It’s for a child, so we thought we would have it as bright and cheerful as he would want it.”

Terry got in touch with mum Ruth and dad Kevin, 42, when Tommi fell seriously ill.

“Just before Tommi was put on life support we received a personal letter from John Terry and it was read out to him.

“He was heavily sedated so we only hope he could hear us,” Ruth said.

“He adored the whole team as well as Petr Cech, before he went to Arsenal.”

Tommi also received another letter on behalf of the whole club that had been signed by defender Gary Cahill.

The request for Terry to help was put in by friend of the family, Tawney-Biana Toogood who sent the footballer a message on Instagram.

He replied immediately asking how much it would cost and then contacted the funeral director to ensure it was legitimate before agreeing to pay.

Tommi hit headlines in 2014 when his benefits were slashed after he was given the all-clear, and his parents were forced to rely on foodbanks.

Initially, when Tommi’s leukaemia came back, the family were refused increased payments but they were eventually reinstated all their payments.

But a big community fundraising effort also provided the Miller family with some financial support.

Tommi, who was diagnosed with leukaemia aged just 3, leaves behind his 10-year-old sister Kacey.

The service, which is invite only, will also see 100 blue balloons released into the sky.