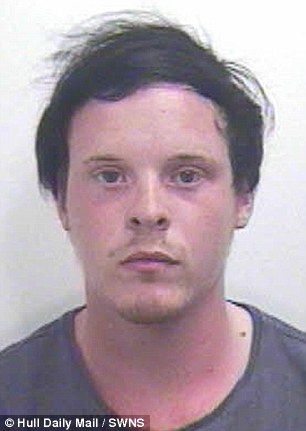 A pervert has been slammed as “manipulative” by a judge after he groomed a 13-year-old girl on Snapchat – before having sex with her six times.

Christopher Lowde, 21, was first contacted by the girl in late 2013, but arranged to meet the youngster in a nightclub in Spring 2014, a court heard.

David Gordon, prosecuting, said at the end of the evening, Lowde asked the girl for sex and she agreed.

Lowde drove the girl to the coast village of Fraisthorpe, near Bridlington, East Yorks., and then had sex with her on the front passenger seat of the car.

Mr Gordon said: “The defendant took her home. She was concerned about being
pregnant. No protection had been used.

“The defendant took fright and stopped contacting her for about three weeks until the pregnancy scare had gone.”

Lowde contacted the girl again through Snapchat and see agreed to meet him again.

He drove the girl to an industrial estate near Bridlington and had sex with her again in his car.

The girl told police she had sex with Lowde six times in total, including at Lowde’s parents’ home.

Mr Gordon said: “Looking back, she feels violated and realises he was just using her for sex.”

In mid 2014 the girl confided in a child protection officer at her school and Lowde was arrested.

Mr Gordon said: “The defendant said he had consensual sex with (the girl).

“He said that he had known that she was under age.

“He accepted that they had sex at his house and at Fraisthorpe on three to five occasions, but not at Carnaby Industrial Estate.

“He insisted he put her under no pressure in this regard.”

Mr Gordon said there was a number of “aggravating features” to the case, including Lowde using Snapchat to groom the girl over a number of weeks.

Lowde, from Driffield, East Yorks., pleaded guilty to two counts of sexual activity with a child.

Paul Genney, mitigating, said: “This case goes back to March 2014. This man has not been in any trouble in all his life. There have been no offences committed since. This was a one-off.”

Mr Genney said there had been “mutual attraction” between Lowde and the girl and the sex had been consensual.

However Mr Genney said Lowde accepted “people of this age (the girl’s) need protecting from themselves.”

Jailing Lowde for 21 months, Judge Kate Buckingham told Lowde his crimes amounted to a “manipulative course of conduct”, which had “an element of callousness”.

She said: “There was a degree of planning and grooming.”

Lowde will also be made subject to a sexual harm prevention order for 10 years.