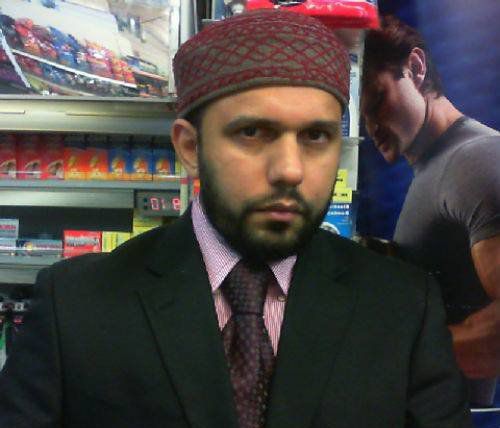 The message “united against extremism” will run on posters on 50 buses across the city following similar campaign success in Dundee and Edinburgh.

Mr Shah,40, was an Ahmadiyya Muslim, a group known for its peaceful practices and acceptance of all religions.

The popular shopkeeper was killed on the night before Good Friday, just four hours after wishing a Happy Easter to “my beloved Christian nation”.

Murder accused Tanveer Ahmed, 32, who is believed to have driven 200 miles from Bradford to Glasgow in his private hire Uber taxi, said he killed the 40-year-old because he had falsely claimed to be a prophet.

Ahmed has been charged with murder and made two court appearances where he made no plea and was remanded in custody.

Ahmed Owusu-Konadu, external affairs secretary for Glasgow’s Ahmadi mosque said the campaign was a “rejection of all forms of extremism”.

He said: “The Ahmadiyya Muslim community is undertaking this campaign as part of its stand on the rejection of all forms of extremism and message of solidarity with all who have been its victims including Asad Shah, minority groups, Paris, Turkey, Brussels, Pakistan, Nigeria and in other places and forms.

“We are launching the campaign in Glasgow after a week of seeing the buses on our streets.

“So many people have seen the signs and been tweeting about them but this is my first time seeing one myself. It feels amazing to see it.

“It’s a case now of trying to get people united and to condemn extremist actions and views.”

Faith groups across the city united to support the campaign with representatives including Roy Henderson from the Church of Scotland, Paul Morron, President of the Glasgow Jewish Representative Council and Charandeep Singh of the Scottish Sikh community all in attendance.

However, after confirming their attendance in the lead up to the event Glasgow Central Mosque and Shia representatives were not present at the launch.

Mr Owusu-Konadu said yesterday: “Glasgow Central Mosque were due to attend our bus campaign launch but they got in touch last night to say they were busy with other engagements.

“The timing wasn’t great but what can you do. I will keep trying to reach out to them and hopefully they will say yes one day.”

But Abdul Ghaffar Abid, Scotland’s regional president of the Ahmadiyya Muslim community, said he was disappointed by the central mosque’s absence.

He said: “I think it is a positive message that we are giving to the communities that everybody is united against extremism although, unfortunately, some Muslim groups despite saying they would be here have not turned up.

“We are a little bit disappointed but we can understand that this is also the reality.

“Extremism does exist within these Muslim groups and it is the pressure of these extreme groups holding them back.

“It looks like they have got some extreme element, and under their pressure they are not here today.

“Hopefully, with the passing of time they will think about their positions and come forward to condemn extremism.”

The snub comes just a day after the Ahmadiyya mosque, Bait-ur-Rahman, reportedly received a hate call.

Mr Owusu-Konadu revealed at the unity launch yesterday (Mon) that the mosque had received a call from a person telling them to ‘go to hell’ in an angry rampage.

He said: “We had a hate call yesterday at the mosque. Somebody phoned up and was shouting over the phone telling us to go to hell and other things.

“It was only one call though, I have a note of the number and will be reporting it to the police.”

And Mr Abid said the community is not surprised by the call.

He said: “We have come to expect calls like this.

“Unfortunately it’s a part of our day-to-day activities.

“It is a shame, it’s not a nice thing to hear. But it will not hinder us from our determination against extremism.

“We are ready to face the extremists and we will keep the authorities informed.”